The automobile first came into popular production early in the 20th century and pretty soon after, the criminal underworld realised that a motorised vehicle could be implemented in illicit activities. So here we’ve given you five of the most infamous getaway vehicles listed from the annals of history and the crimes they have been implicated in. Expect guns, gangsters, booze and bootleggers, not to metion the odd dose of murder and incarceration- an interesting read, but not for the feint hearted!

The image at the top is originally from L’Illustration via Mapsandart.com

This old-timer was made famous by the Bonnot Gang that operated in France and Belgium between the years 1911-12, who predominantly robbed banks. The gang gained recognition for their use of cutting-edge technology like ‘repeating rifles’ that were not yet available to the French police and automobiles for getaway.

The gang used the Delaunay-Belleville to escape after robbing the Société Générale Bank in Paris on December 21, 1911 and this is widely considered to be the first car in history to be used in the commission of a crime.

After the initial incident, the gang went on a crazed spree for several months where they killed several policeman and held up many more establishments before selling on the stolen Delaunay-Belleville. The gang members were all eventually killed in spectacular fashion or apprehended in April/May 1912, through a series of violent stand-offs with the French Police. Being pioneers of the criminal underworld, the Bonnot Gang gave ‘the car that lasts’ an infamous reputation and a firm place in history. 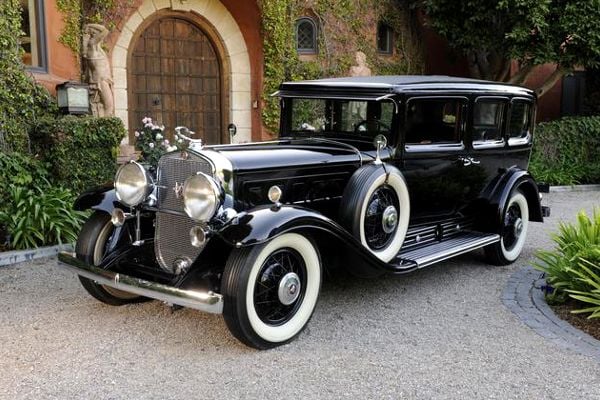 Al Capone’s Cadillac with gun ports in the side windows, via Dave

Al Capone has become one of the most widely recognisable names in the history of crime due to his exploits evading police, money laundering and racketeering. His name is synonymous with Alcatraz, Prohibition and Cadillac, having modified several Caddy’s to fit his needs over his seven year reign as the crime boss of Chicago. He’s also been depicted in several TV programmes and films over the years, most recently by the British actor Stephen Graham in the hit US series ‘Boardwalk Empire’ that also featured Steve Buscemi.

Alphonso ‘Al’ Capone rose to become the leader of ‘The Chicago Outfit gang, which was later renamed ‘The Capone Family’, ruling the streets of Chicago before his capture in the early 1930’s. He ran a multitude of speakeasy bars during Prohibition and has been widely credited with one of the most famous gang-related mass murders of the 20th century- the Valentine’s Day Massacre. He was eventually sentenced for 11 years in jail for tax evasion before dying in 1947 after his release.

Capone was known for customizing his Caddy’s with a host of self defence mechanisms. The 1930 Cadillac 452 V16 Armoured Imperial Sedan (pictured above) was modified to have ¼ inch thick armour plating on the door panels, bulletproof glass with round ports on the side windows to shoot from and a police band radio under the dash.

Other Cadillac’s that Capone was known to have owned have also included panels in the floor to drop tacks and oil on the road and a drop down rear window for ease of shooting pursuers with. Quite honestly, Al Capone took the getaway car to the next level and for that sir, we applaud you! 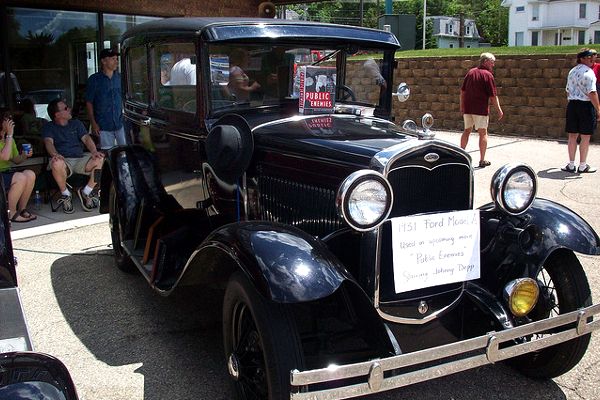 This is the Ford Model A used in the film ‘Public Enemies’, via James

The American gangster and bank robber, John Dillinger rose to prominence during the Depression-era in the United States when his gang robbed two dozen banks and four police stations. Dillinger was so notorious, even amongst his peers, that J. Edgar Hoover was forced to establish the Federal Bureau of Investigation (FBI) as a means of fighting this new wave of sophisticated, organised crime.

Public Enemy #1, John Dillinger used the 1930 Ford Model A to escape from police in a famous altercation that happened in the State of Wisconsin. During the incident, Dillinger smashed the car’s rear window so he could better use his machine gun against the authorities, but could not prevent the driver, John Hamilton, from being fatally wounded.

However, the 1930 Ford Model A goes down in history because Dillinger allegedly sent industrialist and Ford Motor Company founder, Henry Ford a handwritten note in 1934 praising him for his automobile line. The notes authenticity is still being questioned, but it read as follows:

“Hello Old Pal…You have a wonderful car. Been driving it for three weeks. It’s a treat to drive one. Your slogan should be, drive a Ford and watch all other cars fall behind you. I can make any other car take a Ford’s dust.”

A Hollywood blockbuster directed by Michael Mann based on Bryan Burrough’s non-fiction book ‘Public Enemies’ was released in 2009. The film that took the same title featured Johnny Depp as John Dillinger and Christian Bale as the FBI agent Melvin Purvis and also featured the now infamous 1930 Ford Model A as pictured above. 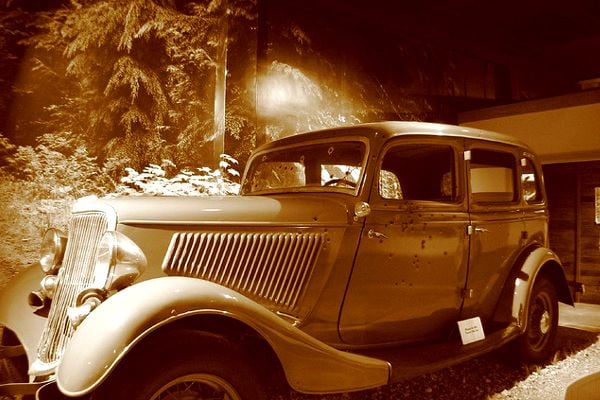 This is the actual Ford Fordor Deluxe Sedan that Bonnie and Clyde were shot in, via “G” jewels g is for grandma

John Dillinger cannot rightfully be mentioned without also naming the equally infamous Clyde Barrow and Bonnie Parker. Bonnie and Clyde were also contemporaries of the Depression-era in the US and are believed to have robbed numerous banks and store owners as well as being responsible for at least 13 murders. Like Dillinger, Bonnie and Clyde also enjoyed their Fords.

The duo stole their 1934 Ford Fordor Deluxe Sedan on April 29, 1934 and used it to commit a host of criminal acts over a vast 2,500 mile stretch of the Central States. They finally met their demise inside the vehicle on May 23, 1934 when they were ambushed and killed by six police officers in Louisiana who unloaded 130 rounds at the pair as they drove by.

In similar fashion to Dillinger, Clyde is said to have penned a letter to Henry Ford in 1934. Like the Dillinger letter, the authenticity of Clyde’s is up for debate, nonetheless, the note read as follows:

“Dear Sir… While I still have got breath in my lungs I will tell you what a dandy car you make. I have drove Fords exclusively when I would get away with one. For sustained speed and freedom from trouble the Ford has got every other car skinned, and even if my business hasn’t been strictly legal it don’t hurt anything to tell you what a fine car you got in the V8.” 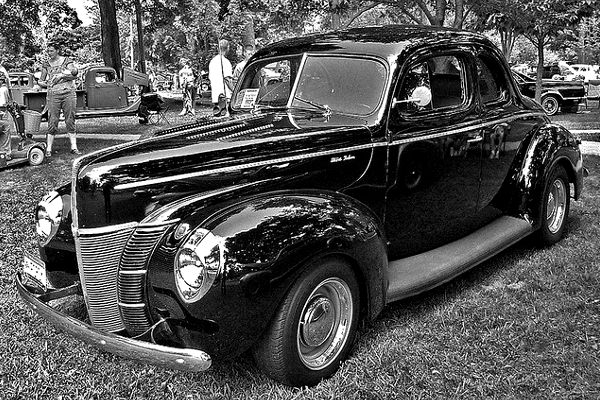 Junior Johnson drove a car similar to this in his bootlegging days, image via Don O’Brien

Junior Johnson is an American folklore hero for many reasons. He is widely regarded as the bridge between NASCAR’s origins and modern era, going from teenage bootlegger to Hall of Famer, with 50 race wins as a driver and six Winston Cup Championships as an owner. We all know that NASCAR spawned from moonshine runners looking for some extra exhilaration when they weren’t being chased by the authorities and Junior Johnson was stereotypical of that, swapping his V8 1940 Ford getaway with a Ford racer in the 1965 NASCAR series.

Before he gained fame for his NASCAR exploits, Junior Johnson lived in North Carolina, where his farming family needed to rely on the tax-free income that moonshine provided them. Johnson was only caught by the police once and that wasn’t when he was behind the wheel- getting arrested in 1956 at his house and being sentenced to two years in federal prison in Ohio.

Johnson gained notoriety for his ability to build fast cars, handle them at high speeds and outrun local law enforcement. He always had an inventive driving style that saw him first create the famed ‘Bootleg-Turn’ (essentially braking hard before doing a U-Turn to shake off pursuers) and then later pioneer the art of ‘drafting’ on the NASCAR tracks (following in a faster cars slip stream then catapulting past them).

A 1940 Ford Deluxe Coupé could carry up to 22 cases of liquor, each holding 12 half-gallon glass jars of moonshine, whilst being equipped with extra-stiff springs to conceal the weight of the load. It was the car of choice for the bootlegger and drivers enjoyed it so much, it formed the basis of a style of dirt track racing car in its later years.

Junior Johnson once explained what it was like driving in NASCAR after growing up as a bootlegger from the age of 14, “It gave me so much advantage over other people that had to train and learn how to drive… I had did all them spinning deals sideways and stuff like that. It just made my job so much easier than anybody I had seen come along and go into it.”