The highly anticipated, second-generation NSX supercar from Honda is designed to deliver a ground-breaking ‘New Sports eXperience’ when unleashed on the market “later this year”. The original concept was first unveiled back in 2012 at the North American International Auto Show, before the finished article was finally revealed at the 2015 Detroit Motor Show in January, where it wowed the crowds with its striking good looks.

Honda are the latest manufacturer to provide their contribution to the turbocharged, hybrid supercar category, following the release of the McLaren P1, LaFerrari and Porsche 918 a year ago and the Lamborghini Asterion concept that was also unveiled late in 2014. Although the NSX wont be in the same league as those aforementioned cars, Honda still has a lot to live up to after the success of their iconic, original NSX. This rear-wheel drive, two-door coupé proved so popular, it stayed in production for 15 years after originally going on the market in 1990. 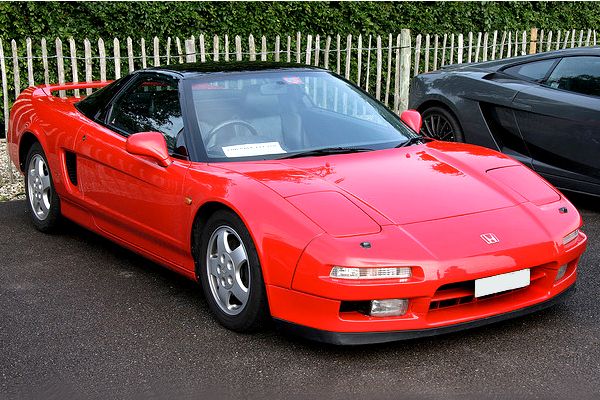 This is an example of a first generation Honda NSX, via Brian Snelson

The Acura NSX will be powered by an all new Sport Hybrid Power Unit; a twin-turbo, mid-mounted V6 engine with a 9-speed dual clutch transmission developed by Acura, combined with a Sport Hybrid system that includes three electric motors. Honda’s idea is to combine lightweight body and chassis with this newly developed engine to provide precision crafted performance that will deliver intuitive and immediate response to driver input.

“The soul of a car is the emotional connection it makes with the driver. With the NSX, that connection will be intense and immediate,” stated Mike Accavitti, senior vice president and general manager of the Acura division. 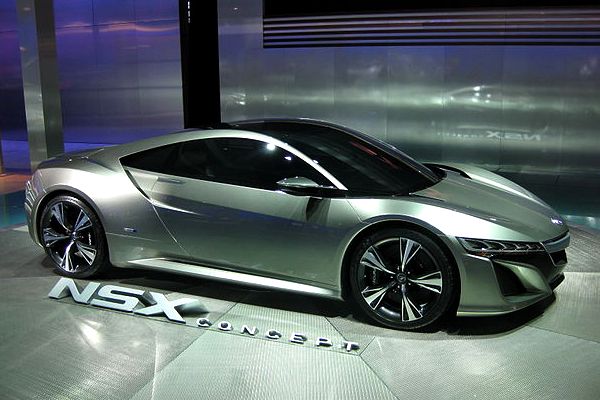 The exterior body design has been carefully fashioned using the company’s Ohio based wind tunnel to increase airflow for both stability-enhancing downforce and vehicle systems cooling. The NSX has undergone a number of significant changes from concept to final body design, including modified hood vents, new front fender vents, modified side air intakes and an optimized deck spoiler. Feel free to play spot the difference with the image above and the one at the very top!

What you wont be able to see from the pictures we’ve chosen are the four centrally mounted exhausts at the rear, alongside a race inspired diffuser. This, in tandem with the gaping side and front vents that somewhat resemble battle scars and the NSX’s low profile, mean it certainly looks like the exterior has been designed with aggression in mind!

The interior has been just as well thought out as well with exceptional forward visibility, a dynamic TFT display and simple, intuitive controls. There is a centre-mounted dial that lets the driver choose between a variety of different driving modes like ‘Quiet’ and ‘Track’. On top of this, the exceptionally comfortable seats feature top-class holding performance and will provide a relaxed driving experience, despite what is happening under the bonnet. 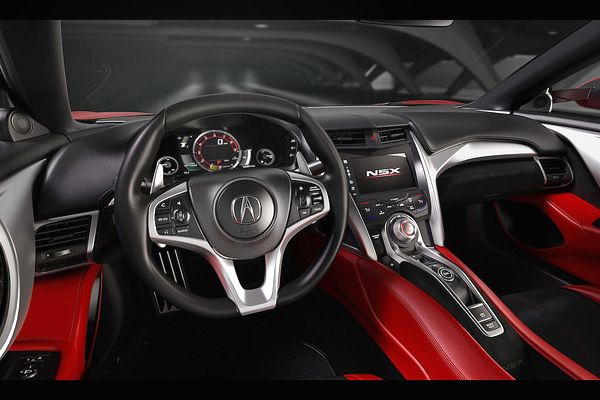 Take a glimpse inside the new NSX, thanks to photos-autos.com

So far there have been no performance figures released, but what we do know is that this AWD car should be producing around 550bhp and will cost in the region of $150k when it first goes on sale in the US. We also know that it will have the Acura badge at this stage as it will be manufactured in their new facility in Ohio, instead of the Tochigi factory in Japan where the original was born. Rest easy though UK fans, the Honda badge will replace it by the time it leaves the American border.

The new-generation will be directly competing with the Ferrari 458, Porsche 911 Turbo and Audi R8 V10, so it’s going to have to be an impressive piece of machinery to survive in such esteemed company. It has the pedigree and heritage, but will the performance match its blinding good looks?