Like it or not, we’re in a world that has become inundated with the combination of crime and cars, whether they be fast, furious, or somewhere in between. Due to their exclusive nature and high price tag, supercars, sports cars, famous cars and vintage cars will always be a target for criminals.

Need further proof? We thought you’d never ask. We’ve whipped up our Top Five famous car heists involving some of our favourite models. Fictitious as they may seem, these events have all really happened and to be honest, you couldn’t make some of them up!

One of the Aston Martin DB5’s used in Goldfinger [at top], via, Mark van Seeters

When the words ‘crime’ and ‘supercar’ are used in the same sentence, how can you not imagine 007 trying to stop bad guys in whichever vehicle he has at his disposal? Perhaps his most famous was the Aston Martin DB5 that was first introduced in Goldfinger starring Sean Connery. It was a gem of a car, equipped with everything from bullet-proof windows to an ejector seat and revolving number plates. With the launch of Goldfinger, the DB5 immediately entered ‘dream car’ status, but where is the infamous auto that was so well displayed in the movie now?

Good question. Aston Martin actually gave EON productions (the producer of Goldfinger) two 1964 Aston Martin DB5s to use for filming. One of the models, the one actually outfitted for the movie with all of the cool gadgets, became known as the ‘Effects Car’. Following the release of Goldfinger, the Effects Car was returned to Aston Martin and it made promotional appearances for decades afterwards.

However, in 1997, the Effects Car was stolen from an airport hangar in Florida and no one has seen the car in over 17 years since. The insurance company’s payout for the car was rumored to be around four million dollars. As for the second DB5 originally given to EON, it sits well preserved in a private Ohio car museum (as seen in the picture above).

More recently, Aston Martin officially confirmed that it has developed an exclusive DB10 model for the upcoming James Bond film Spectre (due for release on November 6, 2015). The car manufacturer is developing its all new DB10 specifically for the film, 50 years after first appearing in Goldfinger with the DB5. Hopefully the DB10 will still be around in 2065 and not suffer the same fate as its ancestor.

This picture from Mail Online shows the totalled Ferrari F50

This is a crazy story that begins with a con man named Tom Baker who had a penchant for stealing Ferrari’s. Baker was an airline pilot and a pretty slick talker, managing to first get a North Carolina dealership to let him test drive a 1989 Ferrari 328 GTS that they never saw again and then later doing the same in Long Island with a 1985 Ferrari Testarossa.

In 2003, Baker walked into Algar Ferrari/Maserati in Philadelphia, claiming he was the CEO of a California tech firm. He boasted that he was ready to make a down payment on an F50, providing that it met his performance criteria during a test drive.

The dealership eagerly handed over the keys and Baker was out the door, literally. He sped off with the F50 at 100 miles per hour and disappeared yet again, leaving Motors Insurance Group to pick up the $375,000 bill to reimbursed Algar for the stolen vehicle.

The car in question resurfaced in 2008, when FBI agents seized it from a Kentucky physician who bought it off Baker. When Baker was subsequently arrested, the F50 was placed in storage. Prior to his sentencing, two FBI agents allegedly attempted to move the Ferrari from one storage facility to another and in the process, ran the car into a bush and totalled the vehicle.

To this date, Motors Insurance Group continue to ask the Feds to repay the money it initially coughed up in 2003 and an explanation of why the two agents were driving it in the first place. The Department of Justice (DOJ), however, stands firm with a closed wallet. According to the DOJ, the Ferrari was being detained by the FBI for an investigation and they’re in no way on the hook for any monies.

Where’s the original F50 that was totalled by the FBI you ask? Good question. It was sold in 2012 to a dealership on the West Coast, who restored it to its full glory. 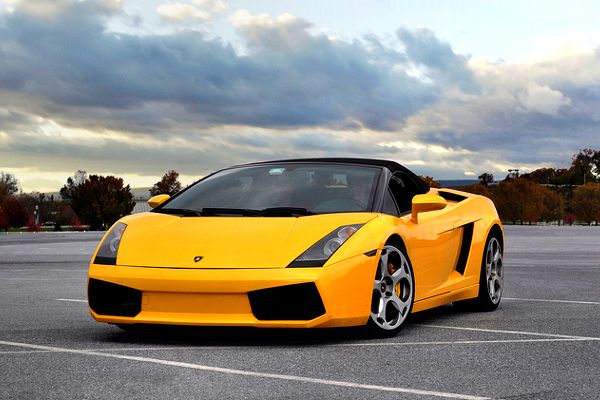 Celebrity chef Guy Fieri received quite the surprise back in 2011 when he was informed that his 2008 Lamborghini Gallardo Spyder had been stolen from a San Francisco car dealership. The surprise grew somewhat larger within the ensuing months after a video was released of the theft, and the thief in action. In true Mission Impossible style, the video depicted a 16-year-old male, Max Wade, abseiling into the dealership, cutting the vehicle’s locks and driving off with the Lamborghini.

According to various reports on the matter, evidence shows Wade meticulously planned the heist and when the car was eventually found in a storage locker, it was retreived alongside guns, disguises, cell phone jammers, police scanners, dismantled assault weapons and a full San Francisco police uniform. His computer history showed that he actively Googled: Lamborghinis, how to jam the ‘Lojack’ auto-theft prevention system and lock picking.

After the video became public, Wade earned the title of ‘ninja teen’, but was eventually arrested for his crime, along with attempted murder, in 2012. He was sentenced to life imprisonment. 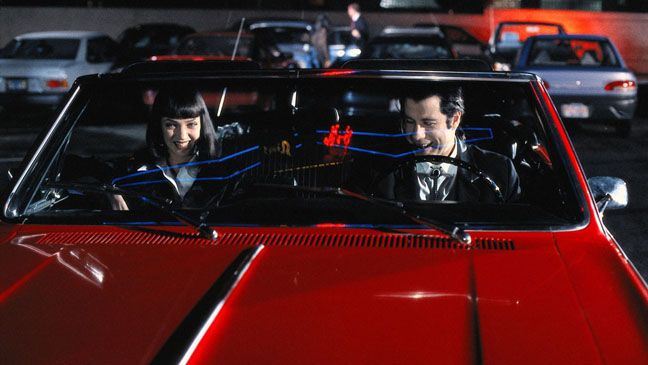 The Pulp Fiction scene showing the Malibu via, Κυριάκος Πηλίδης

The car that John Travolta’s character Vincent Vega drove in the cult classic ‘Pulp Fiction’ was stolen back in 1994, the year the film debuted at the cinemas. In the movie, Vega uses the Chevy to pick up Uma Thurman’s character Mia Wallace in the build up to two of the most iconic scenes in the film; the dance off to Chuck Berry’s ‘You Never Can Tell’ in the ‘50s restaurant and Mia’s overdose.

In equally dramatic fashion, the classic, cherry-red convertible was stolen from director Quentin Tarantino’s drive in the latter stages of shooting and wasn’t found until almost two decades later.

The stolen Pulp Fiction car was found in California in 2013, 19 years after originally being lifted, when Sheriff’s Deputy Carlos Arrieta noticed two men stripping a Chevrolet Malibu. One of the men claimed to have owned the car since the ‘70s, but after some thorough police work, they realised this was in fact the famous stolen vehicle from the film.

Authorities say the car’s current owner was not believed to be involved in its theft and is considered to be a victim of a fraud after it was found out the identification number had been cloned. 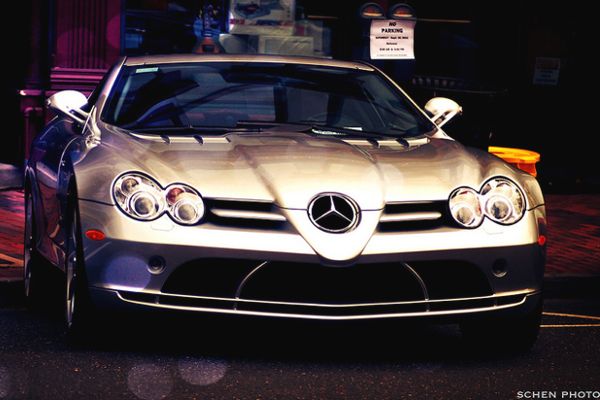 A fine example of a Mercedes SLR McLaren, the most valuable car stolen, via Schen

Back in 2007, British socialite and B-list celebrity, Tara Palmer-Tomkinson (TPT) had her BMW 645 convertible stolen as part of a £1.5m heist that included dozens of upmarket cars in London. TPT was lucky to get her car returned after it turned up at Birmingham airport alongside five other boosted cars, but unfortunately, the remaining 28 that had been grabbed by the gang were never recovered.

The most valuable car they lifted was a £350,000 Mercedes SLR McLaren supercar, thought to be the first of its type stolen in England. The Court also reported that dozens of Porsches, Mercedes, Range Rovers and Toyota Land Cruisers were taken by the thieves during their three-and-a-half year operation.

However, the criminals were not really as clever as they thought as their arrogance led to their downfall. Gang leader Imran Ganchi had some of TPT’s possessions from her stolen car on his coffee table when he was arrested and gang member Yusef Kaduji famously filmed himself on his phone behind the hand-stitched leather steering wheel of the 208mph McLaren. Obviously, these oversights helped lead to their convictions!

Crimes and high performance supercars go together almost like peanut butter and jelly. While fiction can entertain, keep in mind that the use of supercars in the commission of crimes is very real. Just make sure you watch out for ninja teens, con men, famous film cars and parking in London!