Automobile performance is often measured by speed, handling, comfort and braking power. But how well does your car react when it encounters a grazing sheep while accelerating through a banking corner along a narrow, rural road? If you can successfully circumvent the livestock, your reward is a single-lane road that rolls over hills and quiets the mind. Welcome to the world of driving in Northern England.

If beautiful landscape and topnotch driving met on a map, they would collide within Northern England’s charming countryside. The region hosts a fanciful network of diverse rural roads that afford enthusiastic motorists the chance to curve, climb and wind through some of the best landscape the UK has to offer. Listed below are a few of the region’s most daring, sophisticated and intriguing routes.

Duddendale from Hardknott Pass as pictured at top, by Robin Webster via the Creative Commons License.

If steep bends get your motors running, then the A686 that runs from Penrith in Cumbria to Haydon Bridge in Northumberland will deliver blinding success. The AA Magazine recently labeled the route as “one of the greatest drives in Britain”, whilst Top Gear also recently voted it as the 9th best drive in the country. 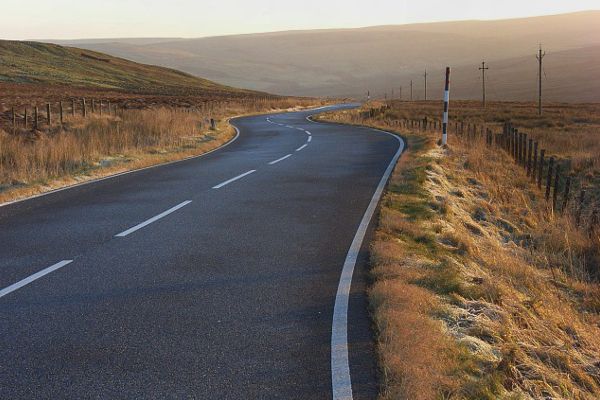 The Hartside Pass in Cumbria by Andrew Smith via the Creative Commons License.

The A686 is a superb stretch of road that features a concerted blend of fast, sweeping bends and tight up and downhill hairpin curves. A stretch of the route also includes the Hartside Pass, which stands at an elevation of 1,904ft and has the dramatic scenery of the Pennines as its backdrop. The only pitfall of this road perhaps, is that it’s significantly monitored by both police cars and camera vans (especially on weekends).

However, this in part adds to the seductiveness of the route with steep bends, hairpin curves and police monitoring that screams Bond, James Bond. This is why the A686 merits the speed and stealth of an Aston Martin V12 Vantage (like the one driven by Pierce Brosnan in Die Another Day), the ideal car for this road.

The Lake District is one of just a few mountainous regions in England, meaning that the area will treat motorists to superb, dipping valleys and the challenges of steep slopes. These features are also readily combined with narrow stretches and excellent twists as the road travels around hills and falls.

A few specific routes to include in your Lake District adventures are:

> Hardknott Pass (as pictured at top)

Driver’s tip: Before you start your drive through the Lake District, it would be highly beneficial to check your braking system. The roads are so dreamy that you may find yourself veering off the tarmac to watch the clouds sail over damp hilltops or just to avoid the sheep! 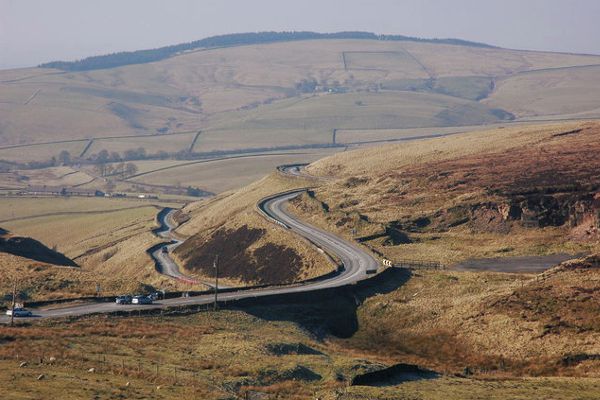 The Cat ‘n’ Fiddle Road in the Peak District is named after The Cat & Fiddle Inn at its summit. Image by Philip Halling via the Creative Commons License

This area is a wonderful collection of contrasting natural beauty. Moors and dales, rivers, springs and caverns all combine to deliver an awe-inspiring picture of majesty. The roads in the Peak District are full of quality climbs and descents as well as housing some real hair-raising bends. Two routes to consider are:

– The Cat ‘n’ Fiddle, (careful: this roadway is often classed as the most dangerous road in all of England due to its numerous and severe bends).

– The Oopnurthring Route (which derives its name from a very popular car club).

Roads full of wicked bends demand an automobile that can undeniably outperform competitors on any figure eight. Baring this in mind, some choice selections for the Peak District that will maximize your enjoyment are the Audi R8 GT, the Porsche Boxster Spyder and the Ferrari 458 Italia.

This drive stretches approximately 90 miles from Barnard Castle to Hexam and covers a diverse range of road conditions. It is splendid throughout the seasons; motorists will experience the tranquility of the moors in the spring and autumn, lambs alongside the route in the summer and snow on top of the hills in the winter.

There are two stand out points with this drive. Firstly, it winds through quintessential Northern English countryside and secondly, it involves a castle. 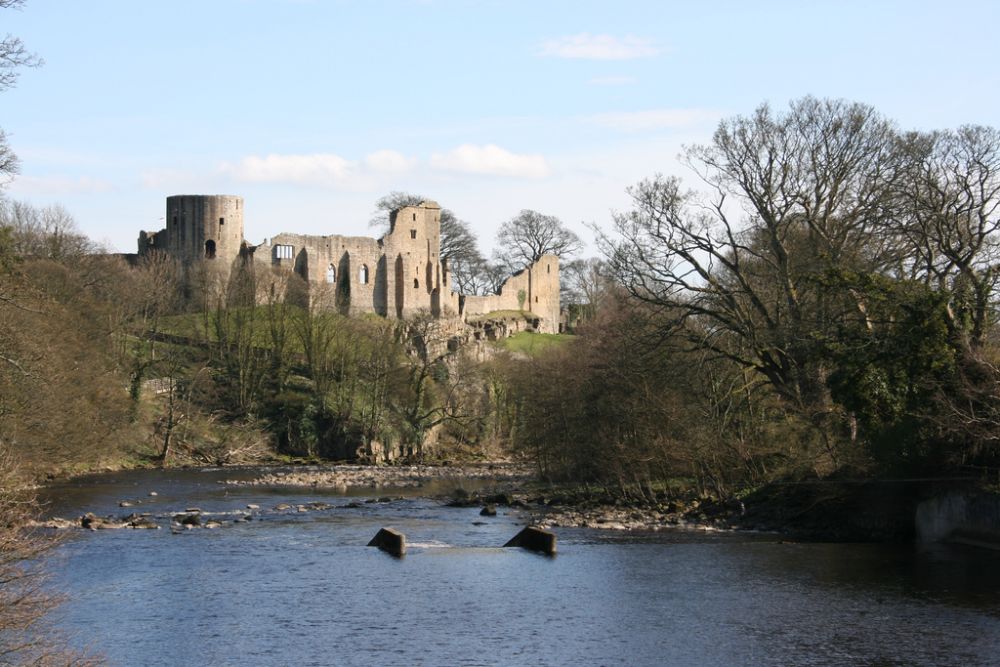 A view of Barnard Castle in Teesdale by Robert Scarth via the Creative Commons License.

The ruined medieval castle at Barnard sits in a market town that shares the same name and depending on the direction of your travels, the Teesdale-based town will mark the beginning or end of your journey. Barnard Castle is a lively little place that’s romantic and quaint and has seen some illustrious past visitors. How about Dickens, Wordsworth, Emerson and Daniel Defoe to name just a few literary geniuses.

Both points above envelop the route with a stately and sophisticated aura that whistles Bentley or Rolls-Royce. If resources permit, do yourself a favor and fully embrace this with a Bentley Speed Six or the 1952 Rolls-Royce Silver Dawn.

Speaking of Bentley, the automaker tells us that “sometimes it’s better to travel than to arrive.” This couldn’t hold truer for the beauty and driving experiences that await in Northern England. The region houses several organisations, such as the Association of North East & Cumbrian Car Clubs that can further assist with driving details and up-to-date road conditions.

As always, be safe, watch out for sheep and enjoy the ride!