Nothing about Scotland is tame, including its roads. No, they’re not full of potholes or road rage, but they can provide the exhilaration of racing ominous clouds over windswept hills, with dominating castles in the distance. If the views don’t catch your breath, the thrill of driving these inclines and curves certainly will.

It’s no secret that driving fanatics love Scotland, so we’ve compiled a list of our top driving roads up there, just for you. Each of these roads feature a distinct terrain and driving experience, so hold off on the Scotch till after your drive, buckle in and experience the ancient land of Scotland.

Image at top shared through the Creative Commons License, by Gary Crawford.

The A93: Blairgowrie to Royal Deeside 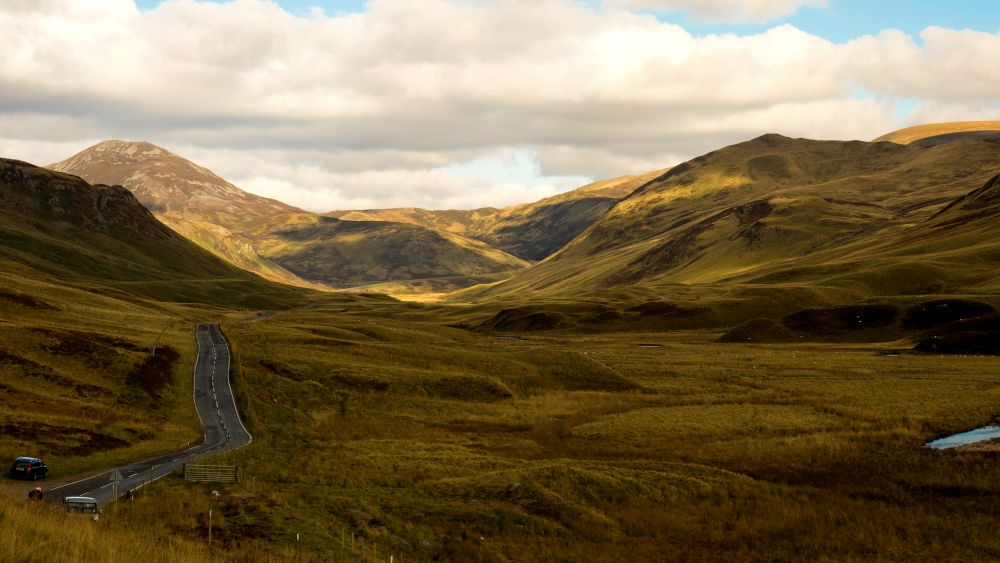 The A93 near the Spittal of Glenshee shared through the Creative Commons License, via Cridhe Mhòr

Royal Deeside is approximately an hour’s drive from Blairgowrie along the A93 National Tourist Route. The route is a favourite amongst motorists due to the road’s twisty climbs up to the pass of Glenshee, which houses Scotland’s largest ski resort. The route climbs a total of 2,182 ft (officially the highest public road in the UK), before it transforms into a quick mountain descent.

Until the late 1960s the road climbing to the summit included two notorious hair-pin bends with a 1 in 3 (33%) gradient known as the ‘Devil’s Elbow’. Now the pass is wide and straight but is still referred to by locals as ‘The Elbow’.

The A93 is a superb route for those travellers especially interested in the Scottish habit known as “Munro bagging.” The phrase refers to the Scottish sport that involves climbing each of the peaks in Scotland that are more than 3,000ft high. In total, there are 284 Munros, which are named after Hugh T. Munro, the Scottish mountaineer who first compiled a list of them.

The A82: Loch Lomond to Loch Ness 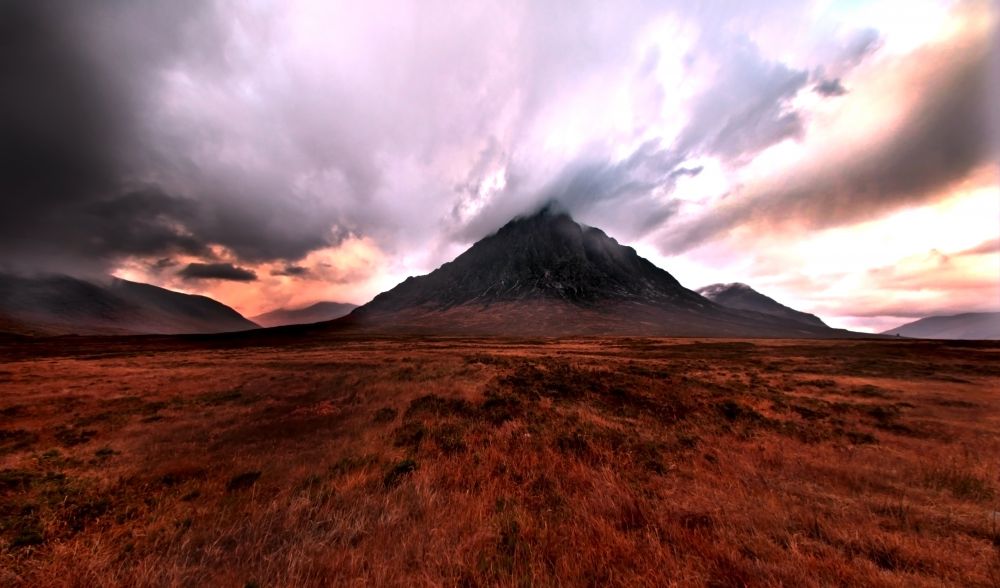 Buachaille Etive Mor, near the A82 in Rannoch Moor approaching Glencoe by Graeme Law, shared via the Creative Commons License.

If ‘big’ is what you’re after, then the second longest primary A-road in Scotland, the A82 from Glasgow to Iverness, is the select route for your travels. It connects Loch Lomond, the biggest inland stretch of water in Great Britain to Loch Ness, ending near Ben Nevis, the highest mountain in the British Isles. The A82 not only presents motorists with massive geographical features, but it supplies a diverse set of road conditions and scenery.

Sometimes referred to as the ‘beauty and the beast’, this route combines long straights, sweeping bends, narrow stretches and tight turns. Equally diverse is the landscape the route travels through. Over the course of 140 miles, drivers will enjoy breathtaking views of mountain terrain (almost prehistoric in nature), the vastness and freedom of highlands and the watery touch of 10 different lochs.

Tourists and poor road conditions do exist along this route- both require caution and reduced speeds. Given the diversity encompassed within this route (and potential for speed and tight turns), either the Ferrari 458 Italia or the Porsche 911 (991) Turbo would be the ideal vehicle for the demands of the A82.

The A7: Borders Historic Route 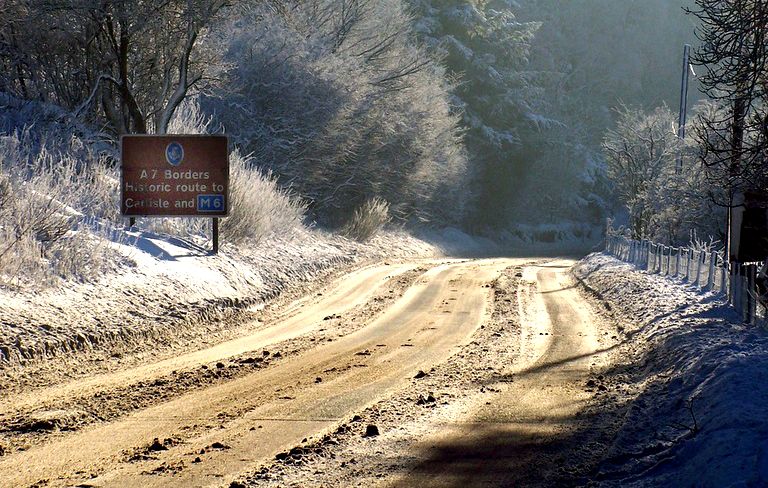 A quiet, but major road near Stow, south of Edinburgh by Robert Orr, shared via the Creative Commons License.

This route is essentially a 95-mile journey between the English city of Carlisle and Scotland’s capital, Edinburgh. Travellers along this journey will experience the dramatic scenery of the Scottish Borders and will be treated to nearly a 100 mile stretch of true Scottish culture and history. So much so that areas along the route served as inspiration for some of Sir Walter Scott’s romantic novels.

Visitors have undoubtedly been attracted to this region for years due to its inherent natural beauty. The route includes stretches of peaceful countryside and views of castles and grand houses in the royal burghs. Motorists enjoying this journey will cross the border between England and Scotland at Scots Dyke.

There is no question that charm, history and tradition single this route out as one of Scotland’s finest. There is also a definite sense of stateliness and sophistication to both the landscape along this route, as well as the towns and villages it travels through. As a result, the class, style and worldliness of a Bentley Continental GT or Rolls-Royce Phantom would complement your travels perfectly. 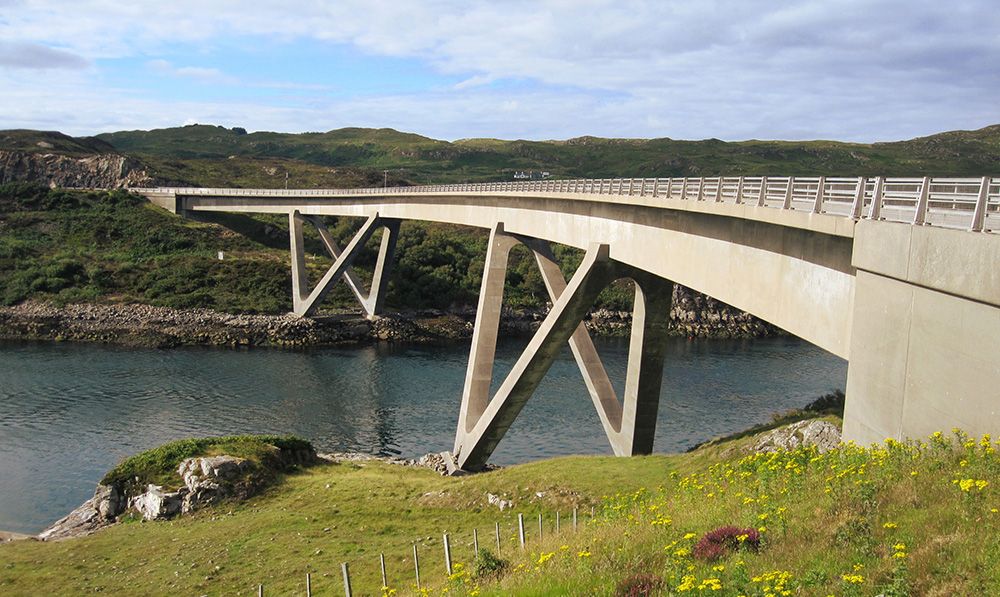 The Kylesku Bridge on the A894 crossing the Loch a’ Chàirn Bhàin in Sutherland by Glen Wallace, via the Creative Commons License.

The town of Ullapool and the village of Durness are situated in the far northwest of Scotland and are connected via the A835, A894 and A838. The route that connects them should be savored and soaked up because the far northwest of Scotland is perhaps the country in its most spectacular of blankets. Leave the Lamborghini’s and Ferrari’s at home for this one- go in style with an Audi R8, Mercedes SLS or an Aston Martin DBS.

Mountains, lochs and small villages all combine to give this area an intricate blend of breathtaking scenery and everlasting experiences. For many, this region is Scotland in its wildest and most scenic form and time should be spent absorbing the route’s pure wonder and natural beauty.

The Assynt hills are a notable feature along this route, providing some of the most distinctive sights in all of the country. Suilven, Quinag and Foinaven are just a few hills that beg motorists to turn their ignitions off and enjoy a casual stretch of the legs. A trip to Achiltibuie (with views of the Summer Isles) and a visit to the romantic beach at Ceannabeine are also noteworthy stops. 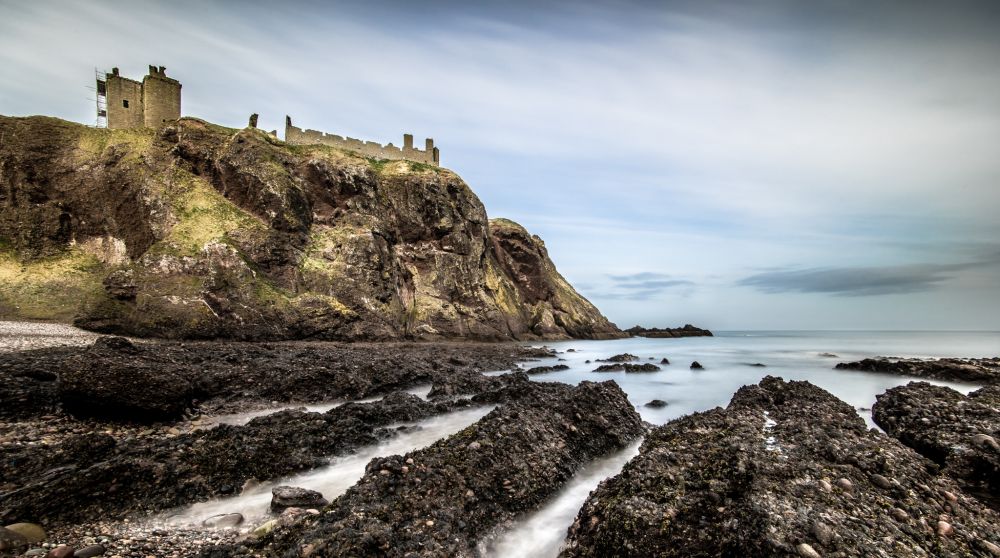 Dunnottar Castle from the beach, near Stonehaven in Aberdeenshire on the Angus Coastal Route by Giuseppe Milo via the Creative Commons License.

The Angus Coastal Route begins its stretch in Dundee, passes through Angus, and finishes its 58 mile coastal journey of Eastern Scotland in Aberdeen. Those journeying along the route will be treated to a host of picturesque seaside resorts, such as Broughty Ferry, Monifieth, Carnoustie, Arbroath, Montrose, Inverbervie and Stonehaven.

This route is simply brilliant if you have other outdoor interests as well as driving as the road connects sandy beaches, nature reserves, country parks and a fertile countryside. All are worthy enough to park up your car in the name of relaxation and gentle exploration.

Idyllic coastlines and beaches should be best discovered in a convertible (weather permitting of course), where driver and passengers can take in the breathtaking vistas. How does a Porsche Boxster Spyder sound? Just remember to bring some sunscreen or an umbrella, depending on the time of year!

As ever, be safe, have fun and enjoy this motoring paradise!