Italy is famous for many things; its food, wine, cars and football are highly regarded round the world, whereas its culture, weather and roads have been the envy of many other European countries for millennia. The Roman Empire revolutionised the way humans were able to travel 2,000 years ago and now, in the 21st century, Ferrari, Maserati, Lamborghini, Pagani, Alfa Romeo and Fiat are doing the same thing again. We have a lot to thank Italy for, including these five Top Driving Roads.

The Amalfi Coast lies along the southern flanks of the Sorrento Peninsula, jetting out from the Bay of Naples and encompassing thirteen municipalities between Sorrento and Salerno, Campania. Travelling along the route, you will pass through several famous and picturesque Italian villages such as Amalfi, Positano and Ravello, that all possess their own unique charm.

Nowadays, it is a source of much tourism, but it has proved a source of inspiration for many artists down the years with its enchanting route. From 19th century composer Richard Wagner, to 20th century playwright Tennessee Williams, to 21st century vocalist, Beyoncé, the Amalfi Coast has remained a constant cultural presence. 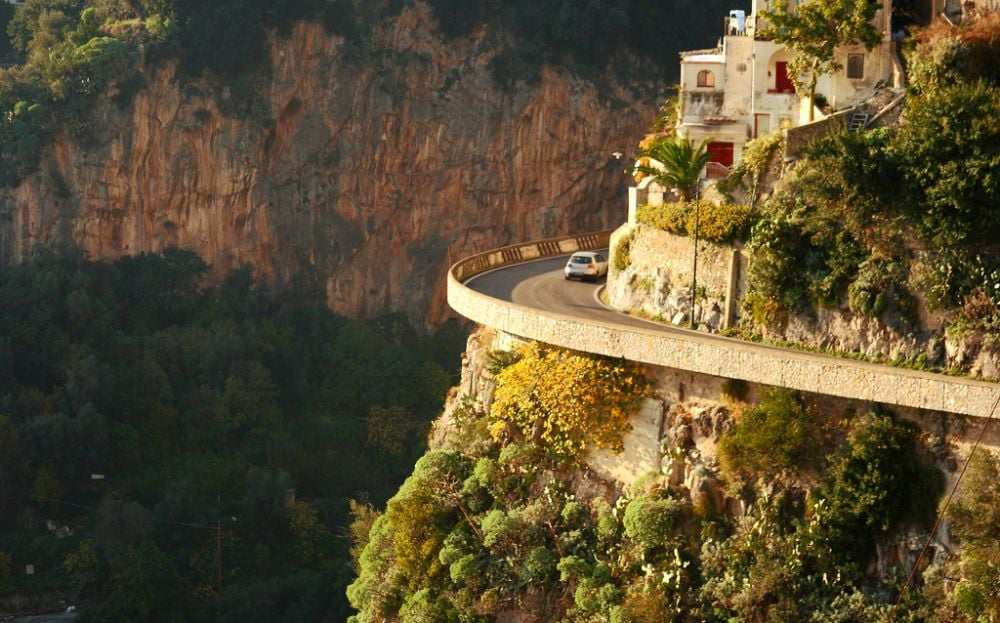 Image shared through the Creative Commons License, via How I see life

The meandering coastal road is considered one of Italy’s most scenic stretches of landscape, combining tight hairpins, with jaw-dropping cliff edges, overlooking turquoise Mediterranean seas. The coast was awarded a coveted spot on the World Heritage list in 1997 as an “outstanding example of a Mediterranean landscape, with exceptional cultural and natural scenic values”. No better way to sum it up than that!

The scenery is so beautiful on this incredible coastal route that it is easy to lose your concentration, so make sure you keep your eyes firmly on the road. Obstacles include locals driving Vespa’s wildly on the wrong side, tight tunnels carved out of rock (as pictured at the top), tumbling, verticle cliff edges and blissfully unaware stall owners perched around the bend of blind corners. A Fiat 500 Abarth could be just the right vehicle for Amalfi; small and compact, but responsive. 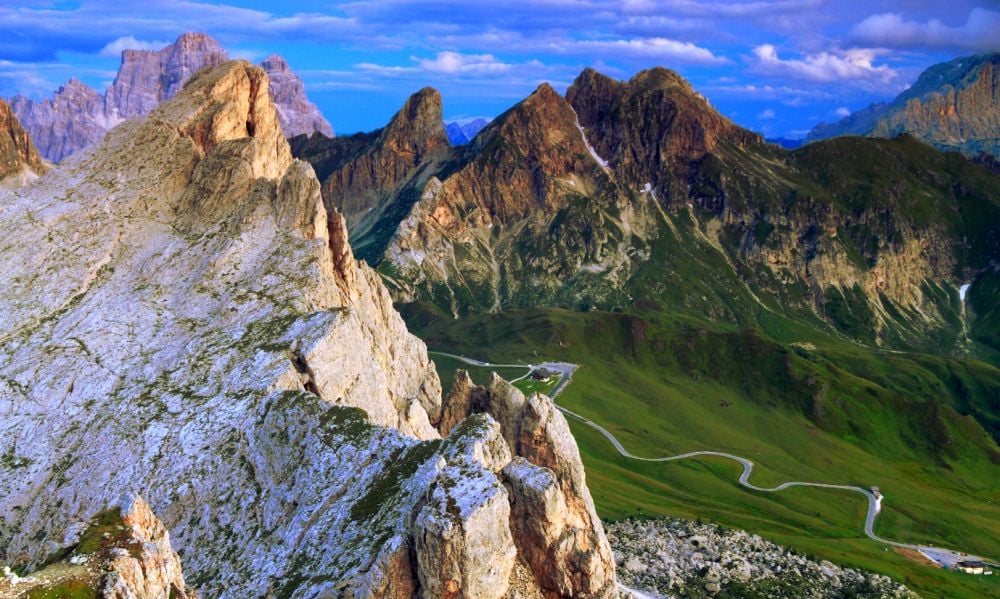 The Great Dolomite Road was built at the start of the 20th century and the 110 km drive from Bolzano to Cortina d’Ampezzo cuts through the most scenic peaks of the Dolomite mountain range in the Italian Alps.

The road is predominantly paved and full of sharp hairpin bends. It can be really fun if attempted responsibly with some grunt under the bonnet; the Alfa Romeo 4C might give you the right balance between speed, acceleration and agility, whilst attracting some looks itself.

However, if you are less confident on the road and don’t have a supercar to speed away from a pesky local tailgating you, then there are plenty of places to stop and pull over to let people pass. These numerous viewpoints and parking areas allow a panoramic view of the surrounding Dolomites and give drivers the perfect opportunity to take some memorable photos.

Expect switchbacks, curves, and hills, alongside charming towns, stunning mountain scenery and friendly locals. A real joy for all levels of drivers. 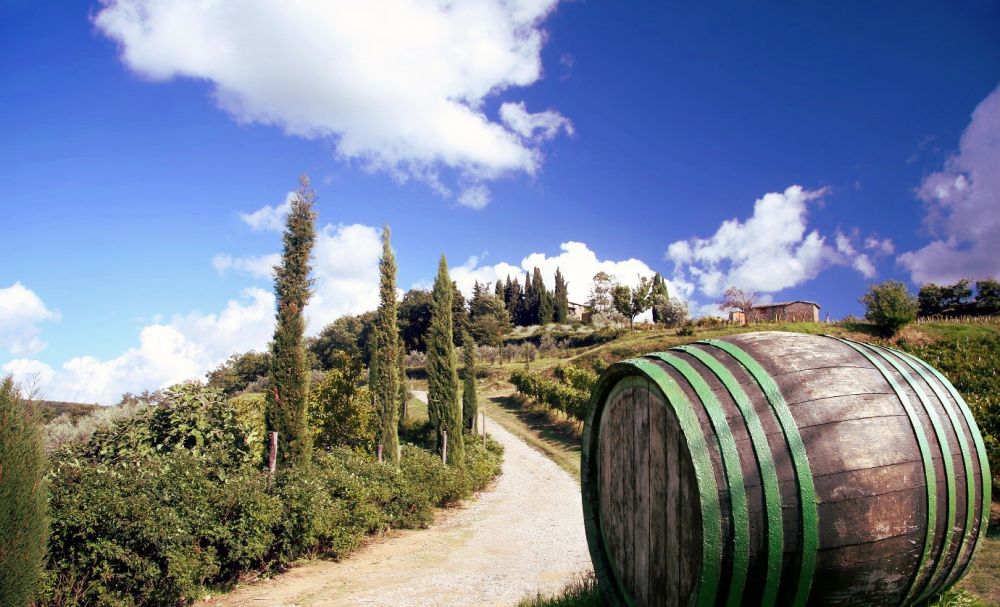 Tuscany is undoubtedly one of the most culturally significant regions of Europe, having an artistic legacy like no other and being the birthplace of the Renaissance. Think Michelangelo’s Sistine Chapel Ceiling and Statue of David, Leonardo da Vinci’s ‘Last Supper’, the Leaning Tower of Pisa, the gothic Cathedral of Florence, the Ponte Vecchio Bridge and rich, Chianti red wine.

The name Chianti has become synonymous with red wine as people from the Chianti Province have been creating quality wine there (predominantly made from the Sangiovese grape) for centuries. The Via Chiantigiana runs directly south from Florence to Sienna, cutting through the middle of the Chianti Classico wine zone of Tuscany.

The seemingly ageless, dusty road that connects rolling hills with quaint villages, following picturesque farmhouses and vineyards painted in pastel shades has only existed for the last two hundred years since land reforms. Before the farmers were given ownership of the land from the monasteries and encouraged to extend their fields into the woodland, the area was far less aesthetically pleasing and much more overgrown and wild.

This winding road will leave you dreaming of a bygone era of cypress trees, rustic villas and enchanting chapels and castles. You simply must drive this in something Italian and classic, how about the Ferrari 288 GTO? 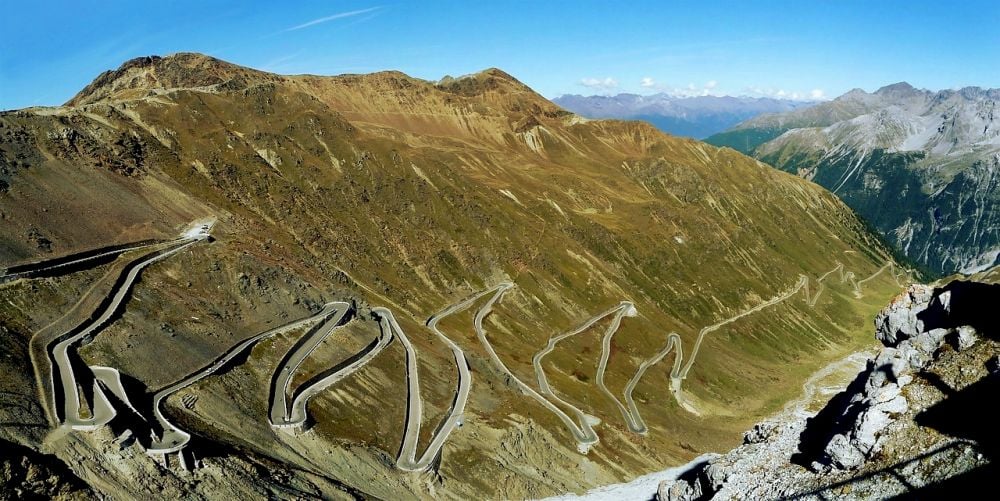 The Stelvio Pass in Northern Italy is the second highest paved mountain pass in the Alps at 2757 metres. It was originally built in the 1820’s with the purpose of linking the Austrian Province of Lombardia with the rest of Austria, and little has changed along the route since. It is pure theatre and the astonishing views you get along the way contribute to its popularity, just as much as it’s testing hairpins.

It is widely considered one of the Top Driving Roads in the world, never mind Italy, and you can see why from this picture. Twisting, curving asphalt is met with breath-taking mountain scenery, as the pass snakes up from Stelvio in South Tyrol and into the clouds, before heading back down to Bormio in the province of Sondrio.

If you attack the road from the North-Western side first then you get to run through the heart of the Stelvio National Park, taking you through several great stretches of alpine forest and along fast, sweeping roads before starting your ascent. Once you reach the top, you can either head down the other side to Bormio (known for its World Cup ski racing), or turn back around and have a go at the hairpins from a different angle.

Its beauty is also its curse. Due to the popularity of the road (especially after TopGear named it the ‘Best Driving Road in the World’ in 2008), your best bet is to go early in the morning or midweek to avoid the traffic and have a clean run at the 48 switchback turns on the Northern side. Jeremy Clarkson took a Lamborghini Gallardo Superleggera and Richard Hammond the Porsche 911 GT3RS– we couldn’t recommend two better vehicles! 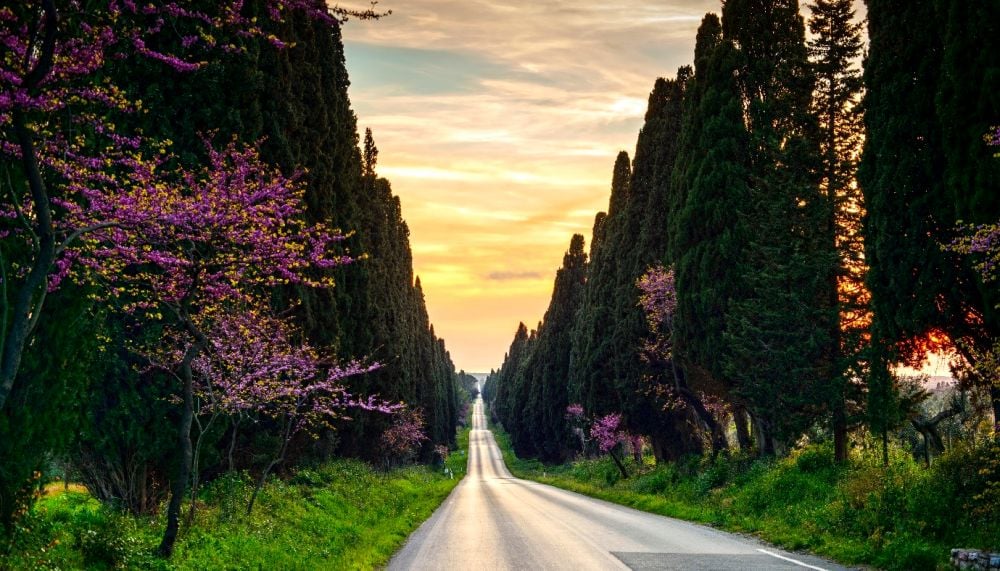 This road may not be full of perilous cliff edges, a spectacular chicane or sharp hairpin bends, but the Cypress Avenue leading into Bolgheri has its own simplistic marvel which makes it just as pleasant to drive down. The unerringly straight 5km stretch is guarded on both sides by 2,540 cypress trees that have all the character and wisdom that you would expect from a living being that has been around for over two hundred years.

The avenue that stretches from west to east in the municipality of Castagneto Carducci, in the heart of Maremma Livorno, connects the Oratory of San Guido to the old town of Bolgheri. The Oratory of San Guido is a sacred church built in 1703 in the town of Castagneto Carducci, so named after the famous poet, Giosuè Carducci, who lived in the vicinity for many years. His melancholy ode, ‘Davanti San Guido’ (In front of San Guido) reads, “The cypresses which, in Bolgheri are tall and proud, run from San Guido in two rows”.

The road that can be found on the Etruscan Coast, not far from Cecina, can be enjoyed at any time of the year, especially in a Ferrari 458 Italia (partly for namesake), drinking in the atmosphere. But do make the most of it, because by the time you reach Bolgheri, with its impressive, red-brick castle, you’ll have to park up and exit the vehicle. The town is purely pedestrianised which might not necessarily be a bad thing, as the area is also internationally known for its distinguished red wine!