Barcelona is one of the most popular cities in Europe, if not the world and is renowned for its food, culture, beaches and of course, sporting heritage. Despite the overwhelming presence of a certain football team based in the same city, the Spanish Grand Prix has proven popular over the years and has been ever present since 1991. The Circuit de Barcelona-Catalunya is tough on tyre wear with few overtaking opportunities, but always provides plenty of entertainment. Can Lewis Hamilton stretch his lead further after a three week break or will the resurgent Ferrari’s cause Mercedes a headache?

The Headlines from Bahrain

Hamilton makes it three out of four and takes his lead at the top of the World Championship to 27 points. This was the 23rd time in the 66 F1 seasons so far that this achievement has occurred and it actually matches Hamilton’s record from 2014, although this time round it seems slightly more ominous. Statistically then, this feat is not that unusual, as it pretty much happens once in every three seasons, which may surprise a lot of people. Still, take nothing away from that achievement as it gives Lewis Hamilton a fantastic platform to go on to win the Championship- only three times out of the previous 22 has the driver in this position not been crowned champion at the end of the season.

Kimi Raikkonen celebrates as Sebastian Vettel misses out on the podium for the first time in 2015. The Finnish driver converted his fourth placed grid position into his first podium of the season by overtaking Rosberg into Turn One and again on the penultimate lap and by leapfrogging Vettel when the German went off track under pressure and damaged his front wing. Raikkonen has had a very unfortunate start to the season, whilst Vettel has taken all the headlines on Ferrari’s behalf, so it is good to see the 2007 World Champion getting his just rewards after some early toil.

Rosberg gets racy for the first time this season, but still can’t manage better than third place. Rosberg had an up and down race- he lost track position at the start going into Turn One, but then showed some real fight in overtaking the Ferrari’s of Raikkonen and Vettel twice in the first half of the race, before losing out to the Finn with two laps to go due to brake failure. In general, the German would have been pleased with his drive, but that will provide little comfort now that an almighty 28 point gap has opened up with his team mate already. 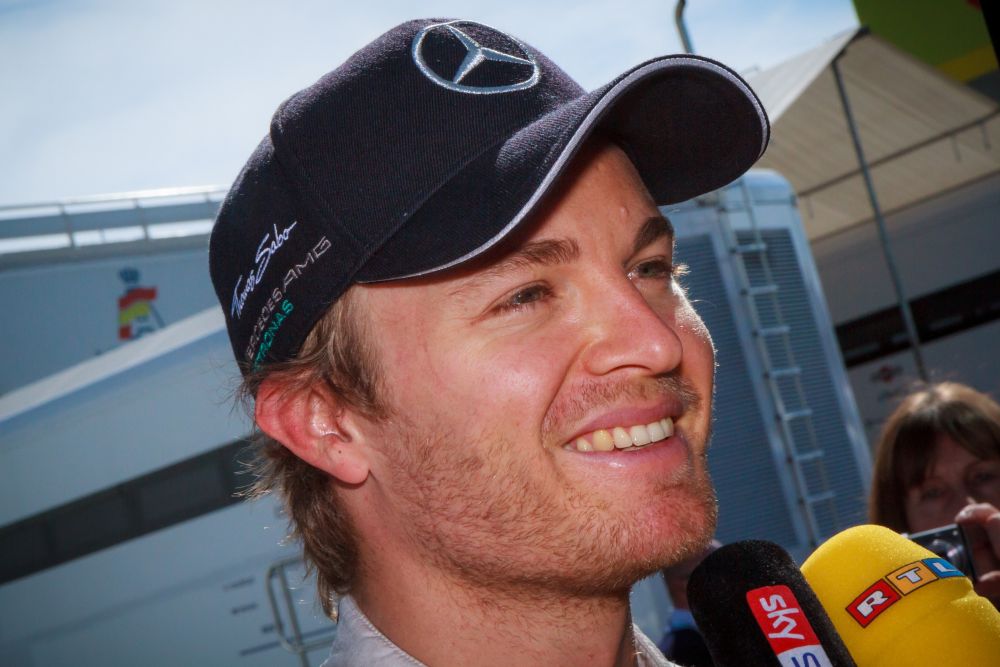 Nico Rosberg fought hard for his third place in Bahrain

Red Bull have a more positive weekend as Ricciardo finishes sixth and Kvyat battles to a ninth placed finish. The Red Bull team have become accustomed to pole positions, podiums and world championships over the last 5 years, but are having to re-adjust their expectations for 2015 as their Renault engine is clearly restricting their performances. Having said that, Kvyat battled really well to go from 17th on the grid, up to a points finish and Ricciardo matched his best result of the season in Melbourne, with a sixth place in Bahrain. This result gave the constructor 10 points for the weekend, their biggest points haul of 2015, but still represents a poor return in comparison to what they have been used to in more recent times. Still, in F1, nothing happens overnight.

We all know that Formula 1 is intrinsically linked to money, but there have been more news stories relating to finance in one way or another circulating since Bahrain than usual, even for F1. Managing Director of Silverstone, Patrick Allen has implored Bernie Ecclestone to make some rule changes to help add more drama to Formula One, amongst fears that Silverstone will struggle to keep the British Grand Prix profitable. Its current 17-year staging contract includes escalating prices and he fears that crowds will diminish over time if they are not provided with more entertainment.

Ecclestone has also come out himself in this three week break and said that the cost of F1 is too high and needs to be addressed in order to help multiple teams that are struggling financially. Whilst Williams also announced that they suffered losses in the range of £42.5 million in 2014 due to their poor 9th placed finish in the 2013 Constructors’ Championship. Their lowest ever finish in their history resulted in much reduced prize money at the end of that season, but chief executive Mike O’Driscoll said they were still “on track”…

And finally, McLaren have made only their second fundamental livery change to their car since 1974, swapping their silver/black/red colour scheme to graphite grey, with day-glo orange highlights. This is, of course, a rebranding exercise in partnership with new engine provider Honda, so as much as they claim that it will “optimise (the car) not only for bright sunshine but also for floodlights used in twilight and night races”, it is also a publicity stunt aimed at fuelling the re-birth of this famous constructor.

The fifth race on the 2015 calendar is the Spanish Grand Prix, held at the Circuit de Barcelona-Catalunya. The track has been hosting Formula 1 since 1991 and is regularly used for testing, so it is one of the more familiar tracks to the drivers. However, regular use does not mean it’s any less physically or mechanically demanding though with its high-speed and low-speed corners, plus its abrasive and rather bumpy track surface. Just ask Fernando Alonso, who will return for the first time since his pre-season crash this weekend. That incident was so serious it resulted in the two-time World Champion being air-lifted to hospital with concussion and then consequently missing the opening race of the season in Australia.

There will be seven drivers lining up on Sunday that have previously tasted champagne on the top step of the podium in Barcelona, can you name them…? We’ll give you a few moments to ponder this over. Right, enough time, you’ll surely remember Hamilton holding off a late charge from Nico Rosberg last year and further back from that you have the usual suspects, Alonso (2013, 2006), Vettel (2011), Button (2009), Raikkonen (2008, 2005) and Massa (2007). The quicker ones amongst you will have realised that that only amounts to six drivers, the seventh we hear you ask? Pastor Maldonado who managed to get his sole pole position, race win or even podium when he won here back in 2012.

As is the case at most tracks around the world, Michael Schumacher has the most race wins here with six, but if Kimi Raikkonen continues with his and Ferrari’s resurgence then he has a chance to go equal second with Nigel Mansell, Alain Prost and compatriot Mika Hakkinen on three Spanish Grand Prix victories. Of course Fernando Alonso also has the same chance to equal that, but if that was to happen in Barcelona this Sunday, we would see either one of the most dramatic, exciting or unexpected races in Formula 1 history.

Lewis Hamilton to win, no doubt about it. There is absolutely nothing that can stop the Brit in his current form, other than bad luck or unreliability and to be fair, Hamilton has been blessed in those two departments so far this season. However, Barcelona does usually prove quite tough on tyre wear, so we could see another close battle up top between the Mercedes and the Ferrari’s.

With a new design comes a new turn of form and as the McLaren-Honda’s are bringing both a chassis and engine upgrade to Barcelona, we reckon that they’ll sail both cars into the top 10, earning them their first points of the season. Of course, this is the most optimistic outcome of how the weekend will go for McLaren, with the other side of the coin being that they will fail to adapt to the change in power and aerodynamics and struggle for both grip and control. Let’s hope for the former. 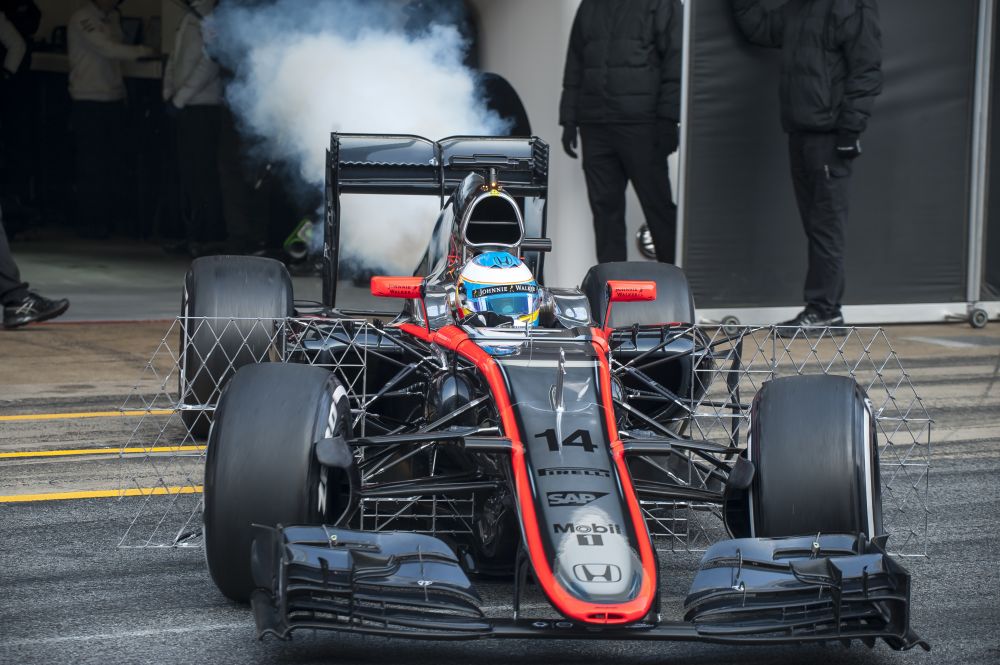 Jenson Button with a smoking McLaren earlier on in the season

“Unless he drives for more than one team, each driver may use no more than four power units during a championship season.” Well, with the Spanish Grand Prix marking the quarter way point in the season, there may be a few drivers who have to manage their engines as they come towards the end of their natural life cycles. Cars that have spent a lot of time in dirty air so far could be at risk, like the middle-of-the-pack racers; Toro Rosso, Sauber and Force India or those who have been struggling to get the best out of their engines, like Red Bull, could be in for a tough weekend.