The Ferrari 812 Superfast was born in Maranello from the reigning F12 ancestor. As per the best traditions it has inherited the fantastic V12 engine, plus a few suspension, steering and aerodynamics features which were pioneered by its older brother and which made an appearance on the limited F12 TDF. However, some Ferrari 812 owners feel that the aural heritage has not been passed down the family line as well as other characteristics. To be honest, the F12 didn’t sound all that great either!

We do love a challenge, so we’ve happily taken on the task of making this blue 812 sound the way a V12 should. Did you just think that’s not possible? Think twice…

Problems with the Original System

When the valves in the original exhaust do open on high revs, they emit nice, but still fairly muted, muffled sound. Don’t get us wrong, it’s not bad however, there’s a lot of excitement possible! Another criticism of the stock exhaust is that owners not satisfied with: the way the sound jumps from valves closed to open. It is far from any definition of sophistication and most passers-by will instantly label the driver as obnoxious, unsociable type.

So to give the car a nicer, more exciting and “linear” sound each owner has three different sports exhaust options available, which work from the rear of the car to its front:

From hours of experimentation we can confidently say that the Stage 2 is the typically the best option in terms of a upgrade VS cost.

We start this Stage 2 this project by replacing the original rear silencers with Novitec Sport Rear Silencers and concurrently installing a remote control unit. The remote control set up gives the driver full control over the cars sound using a sleek remote keyfob. It allows to open the valves up in the Novitec rear system at any point in the rev range and more importantly, also close them again at low rpm. This gives an option to decrease the volume for long distance driving and early starts. It is the perfect solution that will not take away the day-to-day usability AND will give you that old-F1-sound at the touch of a button.

Next, we fitted an X-pipe. This product removes the stock central muffler and allows them us to blend exhaust gas pulses from the two banks of that massive V12 engine. This boosts the car’s volume only slightly over Stage 1, but more importantly, it hones the exhaust tone beautifully. Doing this, lifts the pitch even further and adds a ‘ripping’ edge to the sound.

Here is the journey the 812 went on in the garage: 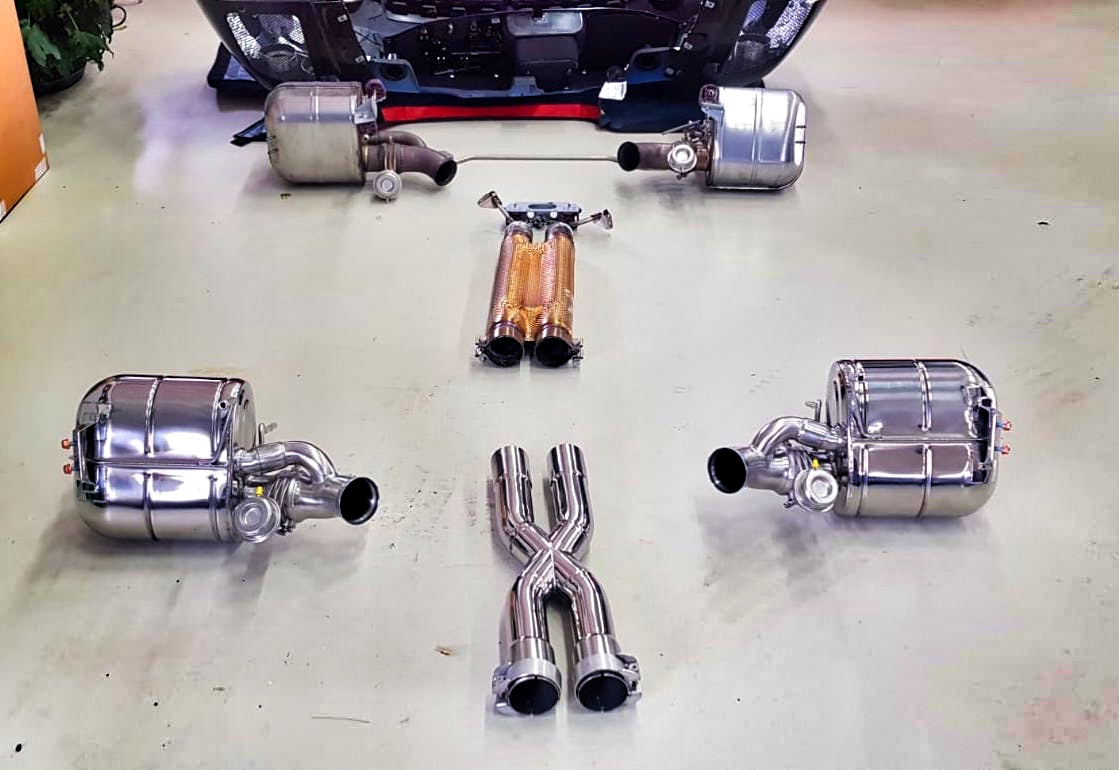 So now, you get a much more exciting sound. The car rewards us with much fuller, deeper and louder growl when it comes to life. The difference is apparent right from the outset of low RPM and then settles on much fuller and throatier large-V12 idle. The note remains deep at low revs and then from about 3000rpm gives way to a much higher pitched soundtrack with volume and intensity increasing linearly, according to the throttle input. This is a crucial advantage of the Novitec system over the stock exhaust. The valves no longer open all of a sudden and the car no longer jumps from silent to louder in a split of a second. The exhaust note now builds in a very sophisticated manner with its intensity increasing gradually and smoothly.

The exhaust note changes once more from around 5000rpm onwards. The exhaust is, but this stage, making a really remarkable high-pitched screaming sound known from motorsport arenas. It is truly transformative difference over the standard set up. Of course because the valves are controlled by the remote now instead of the ECU, even when off the throttle, they do not close (unlike with the stock system) which means they get offer the same linear winding-down of volume and sound and fantastic pops and crackles on the over-run.

It’s a fabulous sound – intense and visceral – so much so that we will risk saying it is probably the second best in the world after iconic F50 V12 (or perhaps third after the Carrera GT with Inconel Straight-through system).

So, why Stage 2 is the most popular choice? It’s sensibly priced given that it replaces 2/3’s of the original 812’s system. And it just sounds fabulous. The addition of the X-pipe just lifts the high-pitched scream even more.

Those who would like to push their car even further often invest in the Stage 3, which also removes the catalysts and fit cat-replacement pipes. This option transforms the Ferrari 812 into a vehicle which you can easily mistake for an F1 and with the valves open the car quite literally SCREAMS down the road. It’s more costly too – as there is additional labour and special module required to allow the cat-replacement pipes to be fitted. Please give us a call if you would like to discuss it in more detail. It is pretty special, but for most owners, it is excessive!

We didn’t manage to get a video of the blue car which was equipped in this blog (it was brand spanking new!) but here’s a video of the full STAGE 3 Novitec Exhaust fitted to an 812 with Noviec 812 N-Largo bodywork and wheels. Your stage 2 will sound essentially the same – only substantially quieter – as your cats will be retained!