The McLaren MP4-12C with original plastic front grill slats and side air intakes, via M 93.

This 3.8 litre, V8 twin-turbo supercar was released back in 2011 by our friends at McLaren, but unfortunately the Woking-based manufacturer stopped production earlier this year. This elegant, mid-engined car is subtle and modest, but it produces 616bhp and will fire you from 0-100km/h in 3.1 seconds, with a top speed of 207mph according to McLaren.

As with the McLaren F1, which had previously been the last production car that was solely designed and built by McLaren, the MP4-12C is extensively carbon fibre based to minimise weight. For example, the chassis is based on a Formula 1 style, one-piece carbon fibre tub that weighs a miniscule 80kg and the ‘C’ in its name even represents the Carbon used.

Despite this, the standard fixtures and fittings are not all carbon fibre based, which leaves huge scope for upgrading the aesthetics of the car. If you own an MP4-12C and are looking to upgrade it in this way, then buying the original parts from McLaren can prove incredibly costly, so we think the aftermarket prices give you much better value for money. 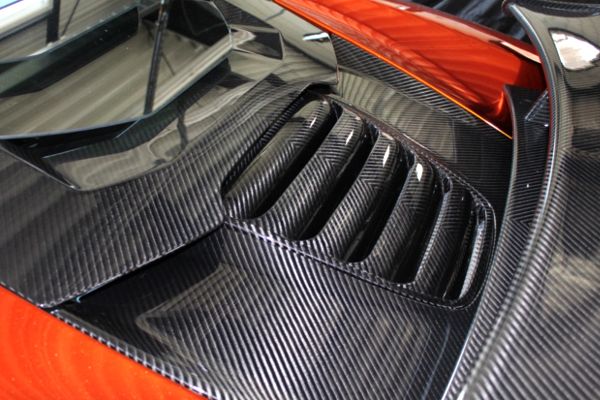 Here’s a fantastic engine based package that a customer has just ordered, with a few additional extras thrown in to put on those final touches. In the image above you can see the engine cover and engine cover intake and alongside the engine panel bay, the centre plenum cover in silver and the McLaren badge for the plenum cover, we managed to offer the incredible price of £9,750.

On top of this, the customer upgraded to carbon fibre front grill bars, side air intakes and engine side louvres as shown in the image below, to give the car a much classier look. The front grill slats look markedly better than the original plastic bars (as seen in the image at the top) and compliment the stock carbon front spoiler perfectly, whilst the side louvres match up with the engine cover well and the air intakes round it all off.

There are plenty more add-ons that this particular customer did not go for such as:

Please feel free to get in touch with our friendly and helpful team now on 1-888-527-9396 toll free if you are in the U.S or Canada and +44 (0)1784 434395 for rest of the world. Alternatively, you can email sales@scuderiasystems.com to get quotes on individual parts or if you would like us to price you up a whole carbon fibre package like above!