So it’s the end of another year and we thought we would take the opportunity to round-up some of our favourite cars from 2014. We’ve taken five picks from some of the guys at HQ and compiled a list of personal favourites; these may not necessarily be the fastest, the most technologically advanced or the prettiest, but they’ve stolen our hearts this year. Bear in mind that we’ve already produced a comparison piece on the McLaren P1, LaFerrari and Porsche 918, so we decided that they should be excluded here to give all the others a fair chance!

The Huracan was the replacement of Lamboghini’s most successful model ever (the Gallardo) and taking customer feedback into consideration, they tried to build what they hoped would be an even more impressive specimen. The Huracan maintains the 5.2 litre naturally aspirated V10 engine from the Gallardo, tuned for 602bhp that can get from 0-100km/h in 3.2 seconds, with start-stop engine functionality to increase efficiency.

Huracan is the Mayan god of wind, storm and fire and Huracán is also the Spanish word for hurricane- connotations of presence, grandeur and might, as you would expect from the Italian manufacturers. The model also follows Lamborghini’s naming tradition of being inspired by a Spanish fighting bull as Huracán was a bull known for its courage that fought in 1879.

The Huracan is strikingly good looking (as shown by this model that we had at the office earlier on in the year) as well as being aerodynamically sound. It is made with the finest Italian craftsmanship and has a lavish interior to make you feel comfortable and in control. Lambo’s have always been about passion, flair and excitement and although this may not be the most flamboyant model in their history, it will certainly get your hairs standing on end! 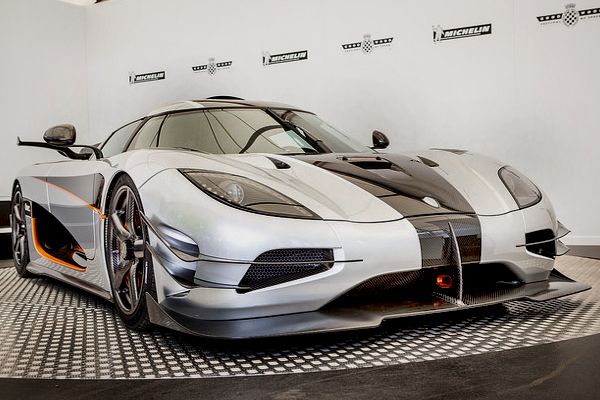 The Koenigsegg One:1 as seen at the 2014 Goodwood Festival of Speed, via Michelin LIVE UK

Koenigsegg have only manufactured six models of the One:1 and they brought two of them to the 2014 Goodwood Festival of speed to showcase their brand new ‘megacar’. The car has been named the One:1 due to the fact that it is the first production car to have a power output of 1 megawatt and its power to weight ratio is perfectly balanced at 1:1 hp to curb weight. It’s easy to see why the car is so light when everything down to the alloys have been made from carbon fibre to reduce excess weight.

The 5 litre twin-turbocharged V8 engine is the same that’s used in all the previous Agera’s, but here it produces a remarkable 1,341bhp meaning it will go from 0-62mph in 2.8 seconds and has a bone-shattering top speed of 273mph! All this power and yet the One:1 can be fuelled using the environmentally friendly E85 biofuel, race fuel or normal gasoline, depending on which you’d rather pump into your Koenigsegg tank.

With this kind of immense power, you need something keeping it stuck to the road and the One:1 has thoroughly well-developed aerodynamics yielding the highest downforce numbers ever achieved on a road-going vehicle, according to company founder Christian von Koenigsegg. The One:1 is expected to beat the Nürburgring track record in early 2015, so it’s safe to say that it goes like the clappers! It’s for this reason, along with its exclusivity, that James has it at the top of his 2014 list.

The villain’s choice! Jaguar have run an ingenious marketing campaign this year suggesting that Brits make the best baddies and the Jaguar F-type R Coupé has been integral to that campaign, featuring in several adverts featuring A-list celebrity actors.

“Power corrupts, they say. If that’s true, then prepare to surrender your soul, for the F-TYPE R Coupe fully understands the allure of power.” – Jaguar

In the original television advert featuring Sir Ben Kingsley and Tom Hiddlestone, Mark Strong (from RocknRolla, The Guard, Tinker Tailor…) drove the Jag around several popular London sights, with the tagline ‘It’s good to be bad’. In the follow up ad entitled ‘The Art of Villainy’ with Tom Hiddlestone (you may recognise him as Loki from Thor), the actor was also seen driving it around the capital, but the advert was consequently banned as it appeared to encourage irresponsible driving.

The F-type R Coupé exudes class and for this reason Andy has chosen it as his top pick. Those classic Jaguar features combined with a swept concept look and an exotic rear design make it an elegant, but powerful masterpiece. Its 5 litre V8 spits out 550bhp and it is so easy to drive at high speeds that we can see why this beauty might be the preferred choice of the villain, or the British actor for that matter.

We have a Capristo exhaust available for this F-Type Jaguar!

A Ferrari 458 Speciale parked up via Ben

Although the Ferrari 458 Speciale was first unveiled at the 2013 Frankfurt Motor Show, models weren’t delivered until 2014, so it just about squeezes onto our list, especially as Tom is so fond of it! The Speciale is the top performing 458 Italia, producing 597bhp and getting you from 0 to 62mph in just three seconds.

Ferrari drew heavily on its extensive F1 knowledge at the design, process and control stages when making the Speciale. The electronics, brakes, suspension and tyres all feature new technological innovations that deliver genuinely superb performances worthy of the Speciale moniker, as well as new front and rear movable flaps that balance downforce and cut drag at speed. It has a power to weight ratio of 2.13kg/cv and the 4.5 litre, mid-rear engine is the most powerful naturally aspirated V8 ever built at Maranello.

The cockpit is sparse, but then the aim of this car is less weight and more speed, as highlighted by the use of carbon fibre in the interior door panels, a lighter seat fabric and the lack of a glove box. Despite this, the Ferrari 458 Speciale has made our top five due to the way its performance makes you feel; from the drama of the earth-shattering noise it produces at high revs to the fantastic response time of the gearbox that makes you feel racing sharp.

For our range of Novitec Rosso carbon fibre exterior upgrades for the Ferrari 458 Speciale, take a look on our website HERE. 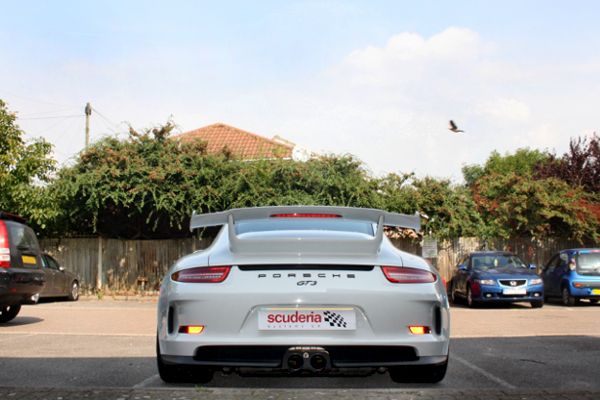 gently tuned one for a discerning customer this summer! It has the same basic bodyshell as the 911 Carrera S, but is longer, wider and, sadly a touch heavier than its predecessor. However, other cosmetic changes from the base 911 include a deep front bumper with air ducts and splitter, as well as a rear bumper with vertical air ducts and a monumentally large rear wing (see above if you hadn’t already noticed).

This 911 GT3 sits in top position amongst Porsche sports cars with naturally-aspirated engines, with its new 3.8 litre direct fuel injection, flat-six engine developing 468bhp. This gives you 0-62mph in 3.5 seconds with a top speed of 196mph that far eclipses its predecessor. Rear-axle steering is fitted as standard, delivering increased agility even on everyday journeys and there’s a new dual-clutch gearbox that is designed specifically for instant gear changes, giving more response than anything before it in a 911.

The 911 991 GT3 is a calm cruiser at low speeds with a comfortable ride combined with an excellent, track-biased ability at the other end of the dynamic range. As usual with Porsches, the brakes are awesome, this one having 350mm carbon-ceramic discs that will grind you to a halt as quickly as any other road vehicle out there. Another all-round fantastic road-track package as you would expect from the GT3 range!

Get a quote on an iPE Porsche 991 GT3 exhaust from us HERE.