Our four-wheeled journey to explore the Top Driving Roads round Europe now heads to scenic Ireland; where history and culture are in abundance and there’s an enchanting mix of tranquil countryside, bustling ports, savage coastlines and lively taverns. The country that inspired C.S. Lewis to create ‘Narnia’ and HBO to film the hit series ‘Game of Thrones’ is full of rugged beauty and this tour takes us beyond borders, through both Northern Ireland and the Republic. Hop in your car and check out these incredible roads in an effort to see the best this stereotypically green nation has to offer.

Image at the top shows a glimpse of the coast from the Ring of Kerry, by Pao Link shared via the Creative Commons License.

The N59 from Galway to Westport including the ‘Sky Road’ 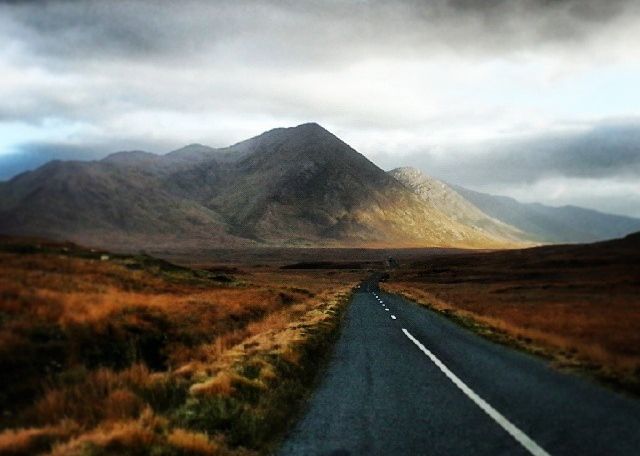 The N59 Road by Philip Daly shared via the Creative Commons License.

The drive from Galway to Westport along the N59 via Clifton and the ‘Sky Road’ is approximately 160km long and takes about three hours on a good day, without traffic. This route, described by TopGear as one of “the world’s greatest roads” will see you travel from one of the country’s most beautiful towns, through rural Ireland, along the coast and into the charismatic Westport which sits in the shadow of the Holy Mountain, Croagh Patrick.

The harbour city of Galway is a popular tourist resort with beautiful beaches and a long winding promenade, perfectly balanced with a cultural, cosmopolitan city centre. Start your journey here after exploring the town’s many bars, museums, shops and festivals. Head west towards Clifden where you will be able to enjoy scenic village life as you pass through Moycullen, Oughterard, Maam Cross and the playfully named Recess, with typically Irish countryside in between.

Once you arrive at the compact Victorian town of Clifton, you can veer off the N59 and take the ‘Sky Road’ which has often been described as the most impressive coastal drive in the country. This 12km loop only lasts about 15 minutes in the car, taking you on a steep ascent along the rugged coastal edge, providing a wonderful vantage point of the open ocean. Stop off to enjoy the panoramic views of the gorgeous Clifden bay and its many islands.

Re-join the N59 and it’s a straight drive north-east, past the Connemara National Park with its mountains, bogs, heaths and woodlands, before heading to Leenaun. Here, the bridge that had stood in the middle of the village for 182 years was washed away in the floods of 2007, but luckily has been rebuilt, and it paths the way up the final stretch to the Heritage Town of Westport. The Maserati GranTurismo would be a great choice of drives for this excellent and quintessential Irish journey. 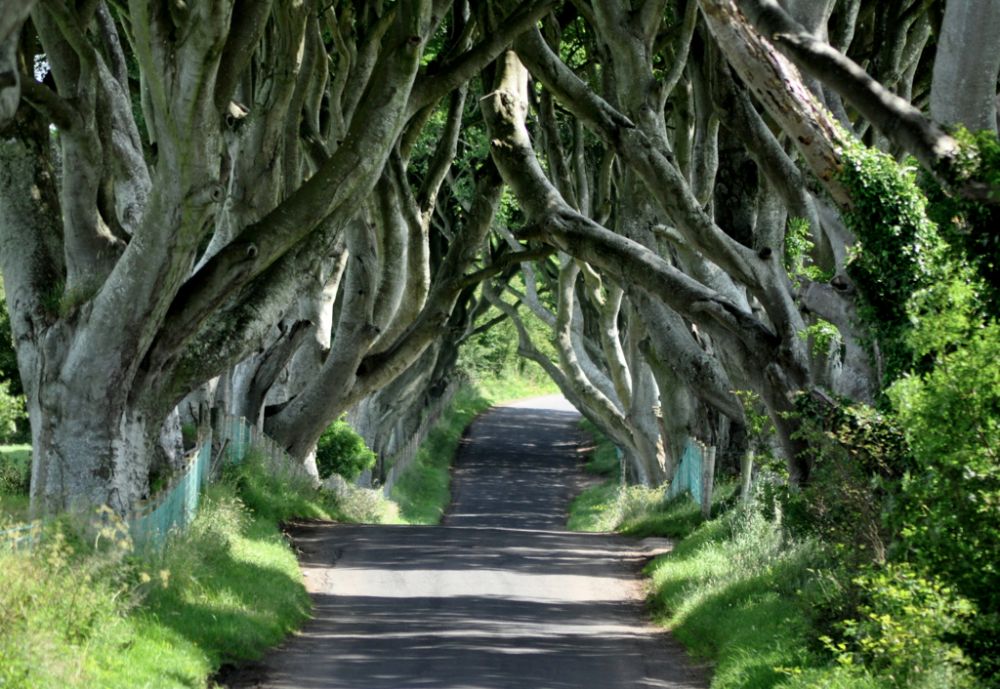 The Dark Hedges in County Antrim, depicted as ‘The King’s Road’ in Game of Thrones, shared by horslips5 via the Creative Commons License.

Have you ever dreamt of going to a place so jaw-droppingly mystical that you felt you were in a globally popular HBO mega-series? Well here is your chance… The Causeway Coastal Road along Northern Ireland’s north-eastern coastline. This spectacular stretch of scenery was quite simply breath-taking before the game-changing, ‘Game of Thrones’ series came to town to shoot on location, but now, it’s a must visit for all those who love a grand tour as much as a bloody beheading.

The journey begins in Winterfell, or Cairncastle as it is known in the real world, where the Stark Castle was depicted on a backdrop of private estate called The Antrim Plateau. Drive north along the coast in a modern day prancing horse like the Ferrari FF– this four-seater will be the perfect carriage for a great family trip! When you reach Cushendun, it might be worth getting out of your noble steed to see the caves where the sorceress Melisandre came ashore to give birth to a dark form, or to look across to Scotland if you are blessed with clear sky on the day.

Veer inland to catch a glimpse of the romantic, atmospheric avenue of intertwined, 18th-century beech trees in Armoy (as pictured above). These are known as ‘The Dark Hedges’ and enable you to literally travel down ‘The King’s Road’ as Arya Stark once did as she fled King’s Landing.

The Carrick-A-Rede rope bridge further north in Larrybane is not for the faint-hearted, but also offers a glimpse of the set for Renly Baratheon’s camp where Brienne of Tarth beats Loras Tyrell in a dual. Within a short drive round the coast you will also find Ballintoy Harbour, the medieval fishing port where Theon Greyjoy returned to the Iron Islands.

For the final leg of the journey, head west towards the spectacular stone formation called the Giant’s Causeway and learn about ‘Finn McCool’, the legendary, mystical giant. Once finished there, you can go via Bushmills (where you can pick up some very fine whisky from the distillery) or continue round the coast past Port Rush where the 2019 British Open Golf Championship will be held. Finally, head to Downhill Beach (Dragonstone) where the Lady Melisandre proclaims, “For the night is dark and full of terrors”. Enjoy watching the waves roll in, in the shadow of the stunning 18th century Mussendon Temple that sits perilously on the cliff edge above.

A view across Killarney National Park by Tony Webster, shared via the Creative Commons License.

The Ring of Kerry on the Iveragh Peninsula encircles Lough Leane and is a 180km round trip along the N70, N71 & N72 from Killarney in County Kerry, south-west Ireland. The road encompasses traditional villages, exquisite beaches, stunning coastal scenery, medieval ruins, loughs (lakes) and emerald green meadows. It’s spectacular beauty and mystical charm has attracted tourists to the area for years and the experience would maximised be in a Mercedes Benz S63, providing both power and luxury.

The smallish, but incredibly popular town of Killarney has more hotel beds than any other town or city in Ireland (besides Dublin), which makes it the perfect place to start and finish this circular route. The town sits alongside the Killarney National Park (the first National Park in Ireland) where you can see red deer, lakes, yews and mountain peaks if you fancy stretching your legs before jumping in the car.

Head out of town clockwise on the N71 and take in some of the many attractions along the way to Kenmare. There’s the 15th century Ross Castle with its lake and many footpaths, Muckross House & Gardens (a Victorian mansion and stately home), the Blue Pool Nature Reserve, the 60ft Torc Waterfall which is enshrined in trees, or Ladies View with its viewpoints of the three lakes and mountains.

At Kenmare it’s time to switch onto the N70 and travel west towards the tranquil village of Sneem that’s split by the River Sneem and is nestled charmingly between mountains and rugged coast. Continue on past Staigue Fort, an Iron Age fort that’s 2,500 years old, near the town of Castlecove, before reaching the most spectacularly beautiful stretch of the route- the section between Caherdaniel and Waterville. 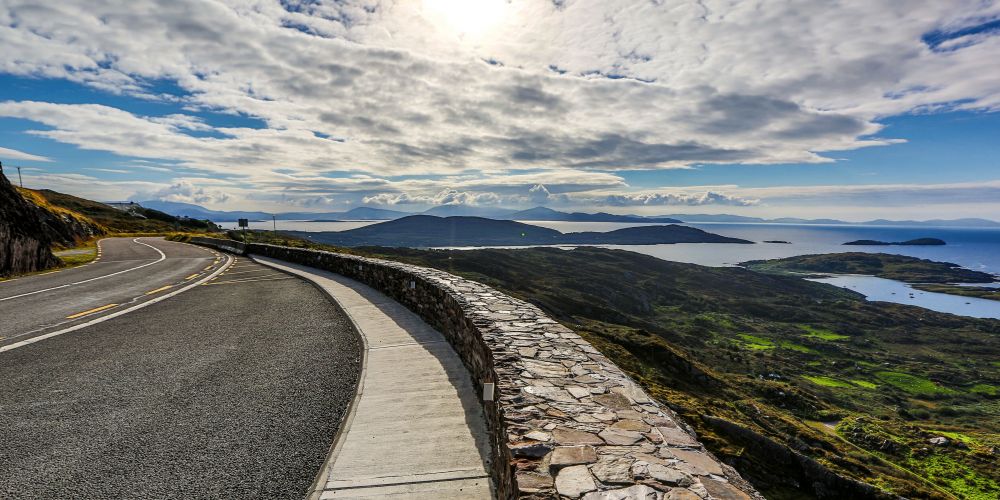 Caherdaniel Viewpoint on the Ring of Kerry by Tony Webster shared via the Creative Commons License.

The view from Caherdaniel (as shown above) is of golden beaches, small islands, turquoise seas and undulating mountains. You’ll be entranced all the way to Waterville where, on arrival, you will be greeted by the picturesque village overlooking stunning Ballinskelligs Bay. Waterville is best known for its Links golf course, trout fishing and association with Charlie Chaplin who frequented the area on his holidays.

Past ‘The Skelligs’, is the market town of Cahersiveen, at the foot of Beentee Mountain, overlooking Valentia Harbour. It’s the next point of note along the trip with its five heritage sites dotted about the centre. Follow the N70 past Rossbeigh beach, all the way up to the small town of Killorglin, where they host the annual ‘Puck Fair’, Ireland’s oldest fair. From here, it’s back to Killarney on the N72, but don’t forget to take a detour at Beaufort village to stop off at Ogham Stones and the Gap of Dunloe! 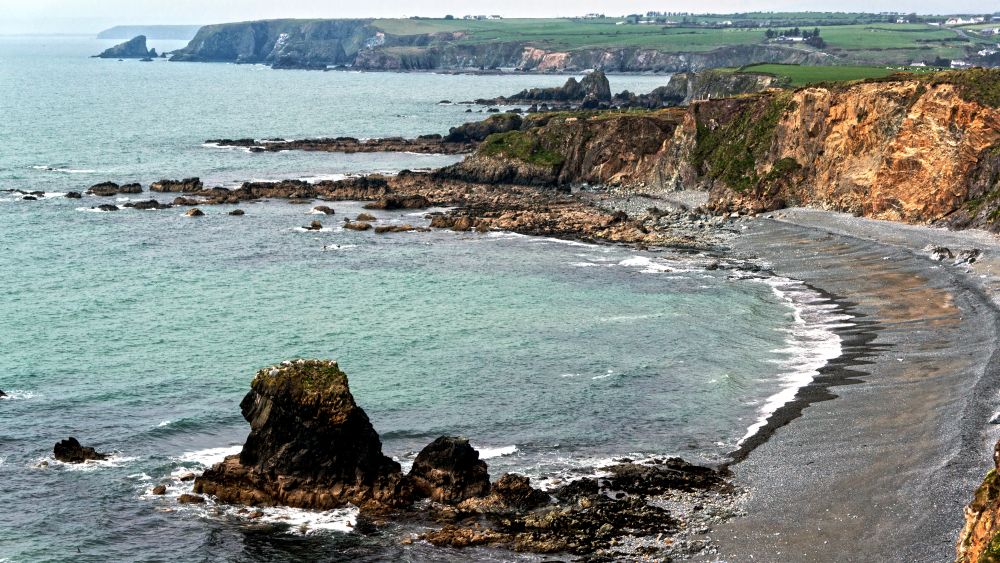 A scene from the Copper Coast Drive by Malcolm Browne via the Creative Commons License.

The Copper Coast takes its name from its 19th century mining heritage and goes through six villages (Tremor, Fenor, Dunhill, Annestown, Boatstrand and Bunmahon), winding its way along the coast, revealing secret beaches and hidden coves, whilst exploring the UNESCO European Geopark.

The start point is Waterford in Munster, which is situated on the south-east coast of Ireland and is known as Ireland’s oldest city, having been founded by the Vikings over 1,100 years ago. Filled with historic sites and lush green river valleys, stunning coastline and a vibrant city, Waterford is the perfect place to begin this short, but splendid coastal drive.

Leave Waterford on the R675 and head to Tramore, a delightful Victorian seaside resort with plenty of intriguing coves and beautiful beaches. On your way out, you can stop off and go for a quick stroll to the ‘The Metal Man’ at Newtown Head as it’s well worth checking out. Afterwards, move along to Dunhill where the ruins of the original 13th century castle can still be seen as well as half of the 15th century tower. The national award winning gardens at Ballymoat House (in Dunhill) with its pond and waterfall also make a quaint trip.

Carry on the R675 to the small village of Annestown that only has about 25 cottages and houses to its name, but is popular with surfers when there are large swells out at sea. Next stop is Bunmahon, where the Geopark visitor centre is located further down the road. Be careful as you drive though as wild birds, rabbits, foxes and other such creatures are prevalent in this area.

Enjoy the unique geological rock formations along the coastline all the way down to the pristine and picturesque port and seaside town of Dungarvan. Here you will find Dungarvan Castle, the Dungarvan County Museum, quayside restaurants, quaint shops, golf courses, mountains, rivers and beaches- a great way to bookend the journey.

The Copper Coast is considered one of the most scenic coastal drives in Europe and it truly embraces the panoramic seascapes, cliffs, bays and coves on the south-eastern Irish coast. Scenes like these really should be enjoyed in a convertible, so the Gallardo LP550 Spyder should do the trick for this short drive.

As ever, please enjoy the roads by driving responsibly!