It seems an awful long time ago that Lewis Hamilton won a breath-taking, thrill-a-minute British Grand Prix at Silverstone to extend his lead at the top of the Driver’s Championship to 17 points. It has needed a three week gap for the public to recover from the rollercoaster ride that Silverstone threw up, but with the recent news of Jules Bianchi’s passing, it has put racing back into perspective. Read all about what happened in Britain, what to expect in Hungary and take a look back over the career of the young French driver who recently passed away.

Inspired Lewis Hamilton wins his third home grand prix in challenging and variable weather conditions ahead of team mate Nico Rosberg. Hamilton dealt with everything that was thrown at him calmly and positively and eventually ended up as the race winner by making a late, instinctive tyre call that had both fans and pundits nervously thinking back to Monaco. However, Lewis had the bit between his teeth at Silverstone and was not fazed by an early Massa overtake, nor losing his second place to Bottas whilst trying an aggressive move to try and retake the lead immediately after the early safety car. He kept calm, knowing he had the pace to win and when the weather left half the racetrack wet and half dry, he raced with supreme skill and confidence. His stop on Lap 43 as Rosberg closed the gap seemed premature, but proved inspired as he then cruised to victory in the final stages.

Williams make a real race of it and spark the 2015 championship into life. If you only saw the qualifying and final race positions, you may be excused for thinking that this was another routine Mercedes one-two, dominating Saturday and then driving away from the pack on Sunday. This was anything but. At lights out on the grid, the number 19 and 77 Williams’ cars flew out of their boxes and immediately overtook the Mercedes pair, with Felipe Massa leading Hamilton and Bottas in front of Rosberg in fourth. An early safety car bunched them up further and Massa held off Hamilton’s ambitious overtake at the re-start with Valterri Bottas taking advantage and moving up to second. The Finn hunted down his team mate, but was unable to pass in the opening phase, until Hamilton undercut them both and took the lead at the first round of pit stops. The Williams’ were still ahead of the second Mercedes until Lap 36 when the rain came, but after that their performance dropped off dramatically and neither driver ended the race with a deserved podium. 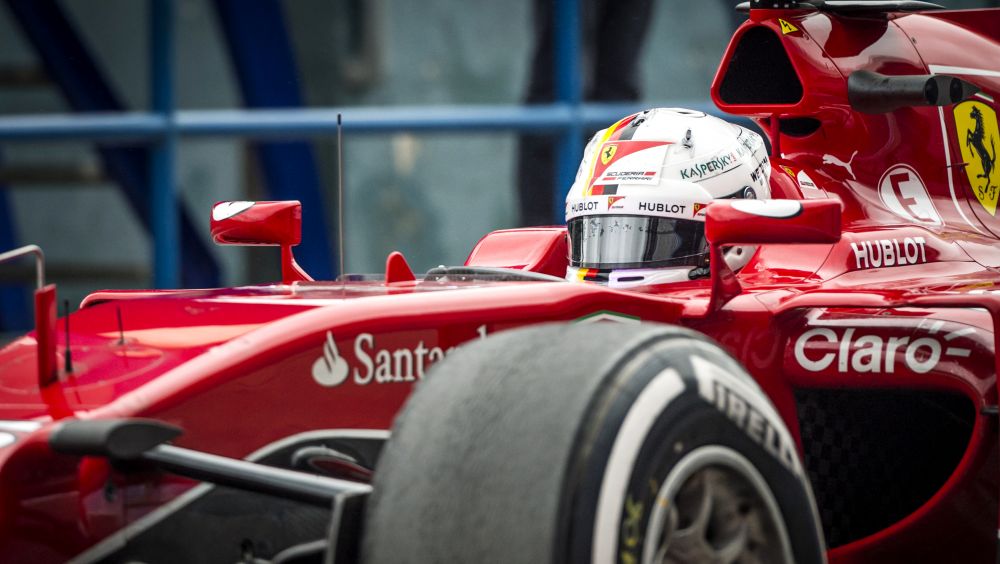 Sebastian Vettel grabs final podium slot out of nowhere from Williams boys. Vettel showed his class in the rain by coming in for wet tyres at the same time as Lewis Hamilton and snatching the last podium position away from the two Williams drivers. Silverstone was the sixth time in nine races that Vettel has joined the Mercedes pair of Rosberg and Hamilton on the podium and is going a long way to repairing the German’s reputation after a disappointing 2014 season. Last year, Vettel relinquished his grip on the World Championship for the first time since 2009 and was totally outdriven by his rookie team mate Daniel Ricciardo, but his consistency in the Ferrari this year has been laudable. Vettel had a relatively quiet weekend in Britain, being out-qualified by his team mate for only the second time this year, and languishing in the middle order for the majority of the race until the rain came. Like Hamilton though, he profited from a perfectly timed pit stop that saw him grab his fourth third place of the season.

Mixed luck at McLaren for their home Grand Prix. Jenson Button could not get any more unlucky at Silverstone, having not made it onto the podium so far in 16 attempts. Never was there a more deserving winner of their home Grand Prix than the 2009 World Champion, but 2015 followed the trend for Button with another disappointing early retirement. This year might have just been his last chance, but Jenson was not expecting to come anywhere near the top with a thoroughly uncompetitive Honda engine powering his McLaren car. What would have hurt all the more though, was being hit off the track by his team mate on the first lap (through evasive action, not anything malicious). Alonso, however, would have been overjoyed at his 10th placed finished, collecting his first points of the season, after what has been a testing season so far for many reasons. McLaren are expecting to be stronger in the latter half of the season, so let’s hope we start seeing the illustrious names of ex-world champions Button and Alonso back towards the top soon, instead of in the ‘Retired’ section at the bottom. 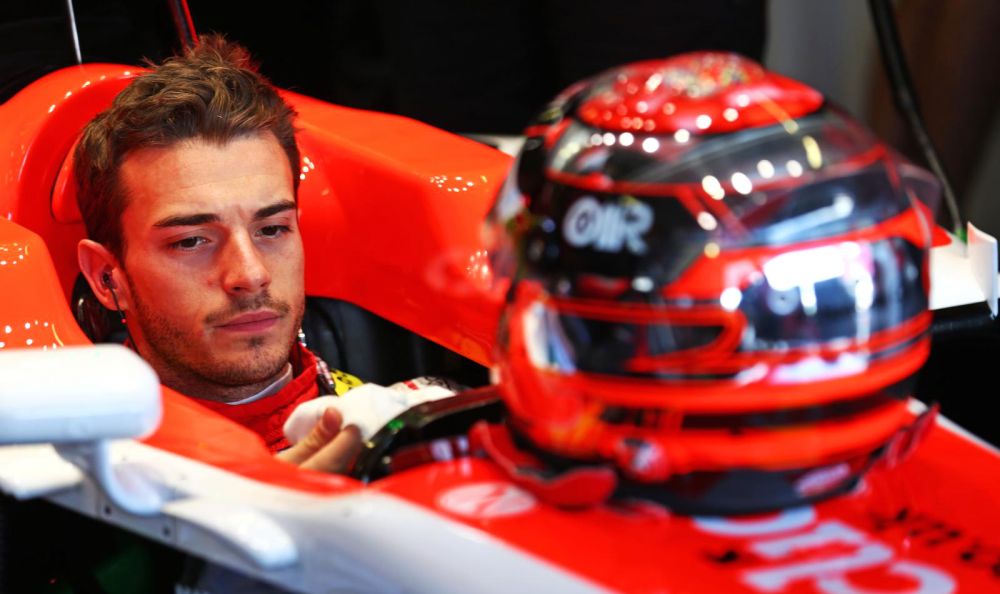 We know that there is always an element of danger involved when an F1 driver gets into their car, but with a 21 year reprieve since the last fatality, we have all been guilty of thinking the sport was finally ‘safe’. There are sure to be many fitting tributes to Jules in Hungary, so here we look back over the career of the young Frenchman to remember a life lost so young.

The 25-year-old French Formula 1 driver had been in a coma since last October, but died on Friday 17th July from head injuries sustained in a crash at the 2014 Japanese Grand Prix at the Suzuka Circuit. He became the first fatality in the sport since Ayrton Senna died on 1st March 1994 after crashing at the San Marino Grand Prix held in Imola, Italy. Bianchi’s funeral was held in the Cathedral in his hometown of Nice on Wednesday and was witnessed by friends, family and many of the current crop of F1 drivers, with Sebastian Vettel and Romain Grosjean acting as pallbearers.

Jules was part of the Scuderia Ferrari family, and had he lived, he may well have been driving alongside Sebastian Vettel next season, having previously been considered by Ferrari as Fernando Alonso’s replacement. It is testament to his skill and high regard, that former Ferrari president Luca Di Montezemolo has posthumously said of Bianchi that, “He was the driver we had chosen for the future, once the collaboration with Kimi Raikkonen had finished.” Instead, we can only imaging what could have been and remember the potential that the young Frenchman showed.

In 2007 when Bianchi moved up from karting (as the reigning French champion) to single seat racing, he immediately impressed, winning five races and scoring 11 podiums out of 13 along the way to becoming the Formula Renault 2.0 champion. Bianchi finished third in the 2008 Formula 3 Euro Series season and followed that up with the title in 2009, winning with a round to spare. 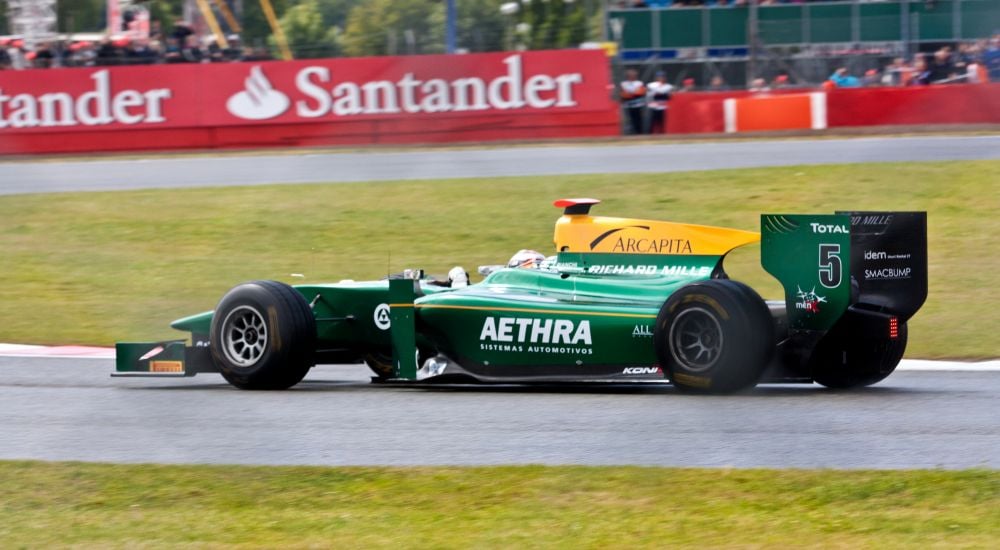 From 2010-2011, Bianchi raced in GP2 having mixed success, being partnered alongside Esteban Gutiérrez for part of that time and racing alongside the likes of Romain Grosjean who he finished runner up to in the driver’s championship in 2011. Bianchi opted to switch to the Formula Renault 3.5 Series for 2012, widely considered the feeder for F1, where he again finished second.

In 2009, Jules had his first taste of Formula 1 by test driving for Ferrari at Jerez as part of the young drivers’ test, before being confirmed by Ferrari in November 2010 as the team’s test and reserve driver for the 2011 season. He became a member of Ferrari’s Young Driver Programme in 2011 before the constructor loaned him out to Force India 2012 where he took part in nine Friday practices and acted as their reserve driver. 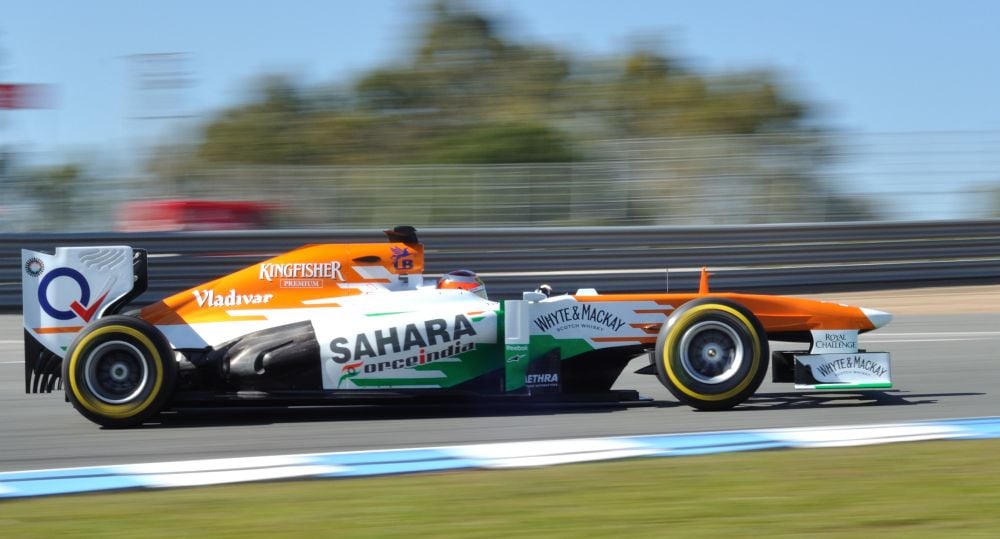 Bianchi testing for Force India at the Circuito de Jerez in 2012. Image shared by Michael Elleray via the Creative Commons License.

On 1 March 2013, Marussia announced that Bianchi was to replace Luiz Razia as one of their race drivers and finished his inaugural race in Melbourne in 15th place in a very uncompetitive car. His best race result that year was 13th in Malaysia as Marussia finish the season bottom of the constructor’s standings with 0 points.

The highlight of Jules Bianchi’s Formula 1 career came when he drove to a masterful 9th placed finish at the 2014 Monaco Grand Prix, winning his, and the team’s, first ever World Championship points. The 25-year-old competed in 34 races during the 2013 and 2014 seasons, Suzuka 2014 being his last. As a final tribute, it has been decided that the number 17 that Bianchi’s car bore is to be retired from the sport as a fitting way to remember a promising driver taken in his prime.

Hungary was granted its place on the F1 calendar in 1986 when organisers decided they wanted to host a race behind the Iron Curtain and it finally got its spot when negotiations for a track in Moscow broke down. Although a tight circuit through the streets of Budapest was first suggested, the location was eventually set in a nearby valley, offering perfect natural vantage points for spectators. The Hungaroring has witnessed some fantastic races over the years; breathless spectacles matched only by the city in which it resides.

But the Hungarian Grand Prix hasn’t traditionally been won by the favourite or the championship leader in recent years- the last man to win in Hungary and go on to win the championship? Michael Schumacher in 2004, over a decade ago!

So not necessarily good news for Lewis Hamilton’s chances then you might think, although the Briton has won the Grand Prix four times already from eight starts. That equals Schumi at the top of the all-time leader board, above Ayrton Senna on three and Jenson Button, Nelson Piquet, Damon Hill, Mika Hakkinen and Jacques Villeneuve on two. Lewis has a great chance to make history then on Sunday by making it five in nine and putting himself in a great position to go on and win the 2015 World Title.

If Hamilton were to win, it would mean a Brit has won the race a remarkable seven times out of the last 10 Grand Prix (previously: Jenson Button- 2006, 2011, Lewis Hamilton 2007, 2009, 2012 & 2013). Nico Rosberg and Sebastian Vettel are yet to make it onto the top step and will be hungry (excuse the pun) to taste success here. Of the current crop of racers, Daniel Ricciardo won last year, JB has won twice before as mentioned, Kimi Raikkonen once in 2005 and Fernando Alonso also managed it all the way back in 2003, although you wouldn’t necessarily expect any of these four to add to their tally this weekend.

As ever this year, it is tough to look past the Mercedes duo for the eventual race winner. The British Grand Prix showed that even with their slow(ish) starts off the line, they still have the race pace to beat the rest of the pack, even if they have to come from behind. Lewis Hamilton’s career seems to be centred round breaking records, so we think a momentous fifth Hungarian Grand Prix from pole to flag is a real possibility. 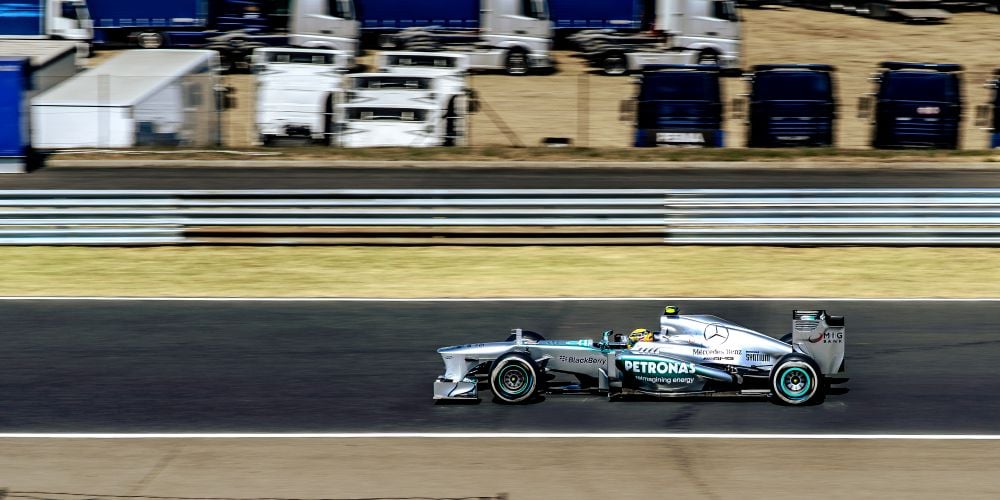 Lewis Hamilton on the way to winning the 2013 Hungarian Grand Prix, shared by Roman Pfeiffer via the Creative Commons License.

The pace off the line of the Williams will have the Mercedes boys worried though and they will be hoping that their engineers can give them a little extra help to avoid a repeat of Silverstone. However, both Bottas and Massa will have renewed hope that the form they showed in Britain will carry through for the next few races. They will now think that Mercedes are on the back foot, but also Ferrari, who have consistently been the second best constructor this season, must be worried at the recent lack of form.

Further down the field, both Force India and Lotus seem to be moving up the field progressively and picking up valuable points in the Constructor’s Championship, so should feature prominently in the Top 10 and Red Bull are just about leading the pack in front of them. Expect it to be an emotional weekend for everyone involved at Manor Marussia, so no one would think worse of them should they perform poorly in Hungary.