This weekend the Russian Grand Prix will take place for only the second time in history, being held in Sochi, the longest city in Europe. The 53 lap race will be held at the Sochi Autodrom and has only been won by Lewis Hamilton previously, so the 2015 Championship leader will go into the race full of confidence. After the Japanese Grand Prix, the Brit has one hand on the title, but can his closest competitors bridge the gap on this high-speed circuit in Russia?

The headlines from Japan

Lewis regains his stranglehold on the title, whilst matching Senna’s win record. Hamilton was unusually inconsistent in qualifying in Japan, but guided home his Mercedes 18 seconds ahead of Nico Rosberg, for their eighth one-two of the season. In winning his eighth race of 2015, he extended his lead at the top of the championship to 48 points, whilst also matching Ayrton Senna’s win total of 41 races. He’s now one race victory behind his contemporary, Sebastian Vettel, and could well overtake him by the end of the season, depending on how the last five races go. Lewis managed his 41 race wins in 162 race starts, that’s only one more drive than Senna who started 161 before his untimely death.

Images of Senna (left) and Hamilton (right) shared by Iwao and First Stop via the Creative Commons License.

Nico Rosberg fails to convert his pole position to scupper feint title hopes. Nico Rosberg impressed on Saturday to out-qualify his team-mate for only the second time this year, but it was the same old story come Sunday. Despite the German sitting on pole, you never felt confident that he was going to hold on to the lead throughout the race. To his credit, he got off to a fairly good start, but as the Mercedes team-mates went into Turn 1 side-by-side, Lewis Hamilton’s killer instincts shone through, pushing Nico wide and down into fourth place by the exit of Turn 2. He initially fell behind Valterri Bottas and Sebastian Vettel, but did at least manage to make those places back up, overtaking the Russian on Lap 18 and his compatriot on Lap 31 after successfully performing the undercut in the second set of pit stops.

Massa and Ricciardo’s races spoilt as they make contact off the line. The Brazilian and the Australian had started in fifth and seventh respectively in Japan, but made contact within seconds of the start. Ricciardo got off to a storming start, but as he went to pass Massa down the middle of the track, the two brushed wheels and this unusually caused them both to suffer punctures. Both had to limp back to the pits, which devastated their races, although both still managed to continue to the end, even if they were lapped. Further down the grid there were other permutations. The knock on effect meant that Hulkenberg, Carlos Sainz Jr, and Sergio Perez all came together as they moved out of the way of Massa and Ricciardo, with the latter spinning off into the gravel at Turn 1.

Alonso embarrassed by McLaren performance at Honda’s home Grand Prix. Fernando Alonso’s frustration at having a power deficit of somewhere between 100-200bhp on the rest of the field, finally shone through. Firstly, the double World Champion got overtaken down the inside on the straight by Carlos Sainz Jr on Lap 5, then later, on Lap 26, Max Verstappen swung round the outside of him with the same end result. Similarly, Jenson Button suffered the ignominy of being the victim of a double overtake when both Felipe Nasr’s Sauber and Max Verstappen’s Toro Rosso whistled past on the same stretch. Both McLaren’s finished out of the points and the Spaniard was heard shouting down the team radio, “I’m being passed down the straights like a GP2… This is embarrassing, very embarrassing”.

What has happened to Red Bull?

Red Bull have had somewhat of a tumultuous year. It began with them not preparing for the season as defending champions for the first time since 2009- they were only distant runners up come the end of 2014. It seemed that, as is the way in sport, success is cyclical and their reign of domination had come to an end. They bade farewell to their 4x World Champion, Sebastian Vettel, who had been the cornerstone to their previous dominance and looked on to the future.

And so, they started 2015 in the shadow of Mercedes, with a fresh-faced new driver in Daniil Kvyat, and the effervescent Daniel Ricciardo, one of the most promising talents in the sport, having won the only three races in 2014 that Mercedes did not. It was though, abundantly clear from the outset that the team had gone backwards from 2014, not caught up the Silver Arrows.

As they faltered and stuttered (Kvyat’s car didn’t even make it through the out-lap in the opening Grand Prix), Red Bull were reduced to the unfamiliar position of scrapping in midfield, not getting either car into the top 5 until Monaco and not securing a podium until Hungary, where Mercedes had a wobble. Now, with five races of 2015 left to go, Red Bull sit fourth in the Constructor’s standings, comfortably behind Williams and Ferrari, and have had to watch their ‘boy wonder’ now winning races in Ferrari red.

And the reason for all this? An uncompetitive car, spawned from the lack of power output the Renault engine is capable of giving them. As a consequence, the already strained relationship between Red Bull and Renault has now completely broken down, after the former has quite publicly blamed their lack of performance on the failings of the latter. That has left Red Bull Racing needing a new engine supplier for 2016, with not much time left to secure a deal. 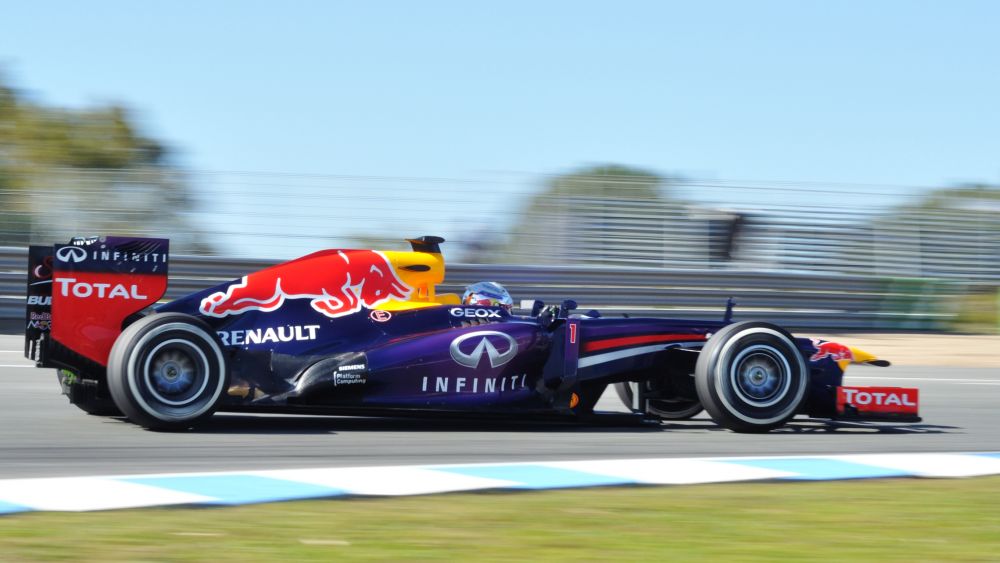 Sebastian Vettel won his fourth title for Red Bull in 2013 as shown by Michael Elleray via the Creative Commons License.

Although that is not as easy as it might first seem. Mercedes have outright said no, as is their prerogative. Why would they want to give a team who are renowned for designing the best cars aerodynamically under the guidance of Adrian Newey, the same amount of power? Likewise, Ferrari are also happy to keep Red Bull down by only offering them their 2015 spec engine. Red Bull, of course, want parity.

The only other current engine supplier is Honda and Red Bull assess their situation so badly, that they have now said that they may well pull out at the start of next season. That is unless they go back to Renault with their tails between their legs and say sorry, or somehow Bernie Ecclestone (who is keen to keep Red Bull in the sport) manages to broker some kind of deal with Ferrari or Mercedes to get them a competitive engine in 2016.

As Lewis Hamilton says, it is rather an odd threat from Red Bull. Surely when the chips are down you work even harder to get back on top, you don’t just throw your toys out the pram and quit like a spoilt child because everything isn’t going your way anymore. There are a lot of employees under the Red Bull and Toro Rosso banner whose lives are dependent on the team staying in F1, least of all the promising driver quartet of Ricciardo, Kvyat, Verstappen and Sainz Jr.

Let’s hope we see them all next year.

This will be just the second year that the Russian Grand Prix has been held in the Black Sea resort of Sochi after its inaugural race in 2014. The circuit is integrated around the streets of the Olympic Park which was purpose built to host the 2014 Winter Olympics. Although the track is new to the Formula 1 calendar, the drivers have already expressed their delight at the high-speed nature of the circuit that also contains some great corners.

Last year in Sochi, 2014 World Champion, Lewis Hamilton dominated proceedings by being fastest in all three practice sessions, taking pole by 0.2 seconds, and then winning by 13 seconds after leading every lap. However, it was young Valtteri Bottas who grabbed the fastest lap for the first time in his career, which means he still holds the track record going into this weekend. 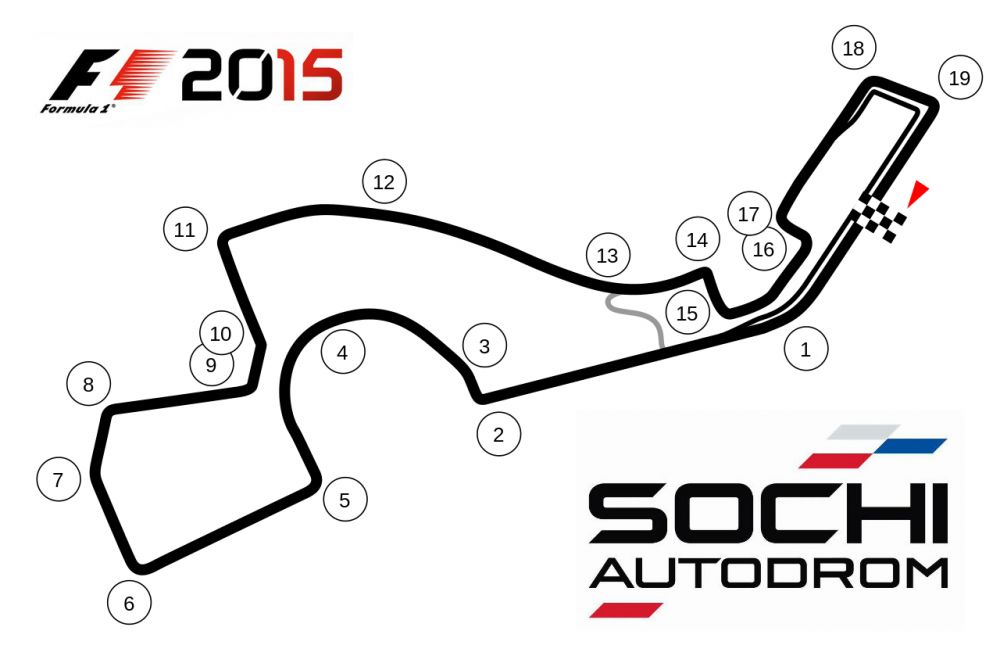 Circuit map of the Sochi Autodrom by Pitlane02, via the Creative Commons License.

Although this track is obviously lacking the kind of historical significance of others, it does lay claim to crowning Mercedes as Constructor’s Champions in last year’s title. With a 169 point lead in the championship this year already, it could also provide them with the 2015 title as well if they accumulate three more points than Ferrari this weekend. With the current form of Lewis and Nico, it’s highly likely that the Silver Arrows will be crowned back-to-back champions in Russia come Sunday.

It seems very unlikely that we will see anyone else on pole other than Lewis Hamilton or Nico Rosberg in Russia. In Japan, they re-established their dominance over the rest of the field and it has looked unlikely in free practice that the Ferrari’s will overturn their deficit.

If we talk in certainties, then Mehri has a 20 place grid penalty and Alonso 35 after more engine changes, so they will start as the back pairing on the grid. If Jenson manages to get through into Q2 then we might see an outside chance of him getting the McLaren in the points, having qualified and finished third here last year, so we know he has form round this track, even if his McLaren was much more competitive last year. 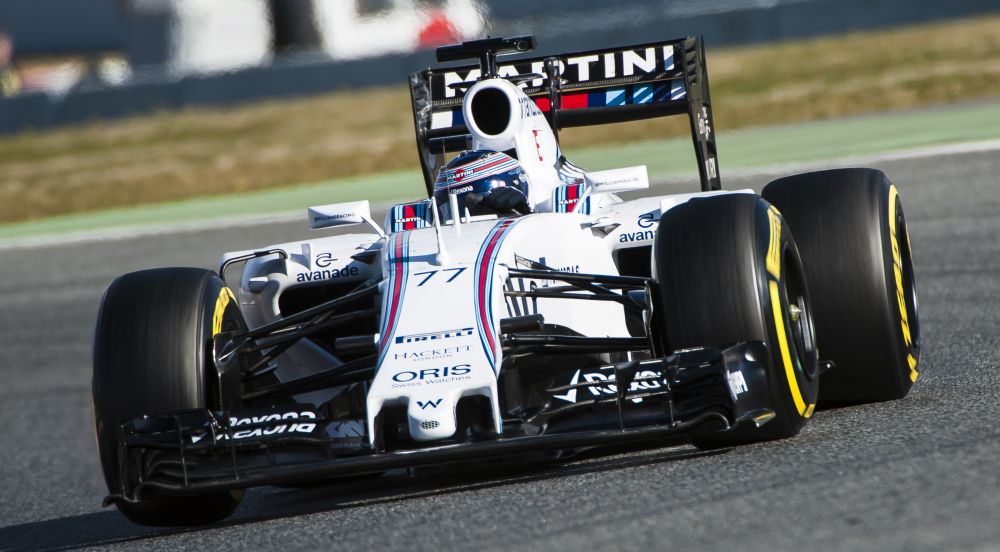 Valterri Bottas is one to watch this weekend as well. He managed third in both qualifying and at the chequered flag in 2014, as well as setting the fastest lap time, so if Williams manage to give him a competitive package this weekend, he would be a good outside bet for the final podium finish. Ferrari, will of course be trying everything they can to prevent that happening and Sebastian Vettel has been back to his very best this year and will be eying up second place in the World Championship, trailing Nico Rosberg by only 11 points.