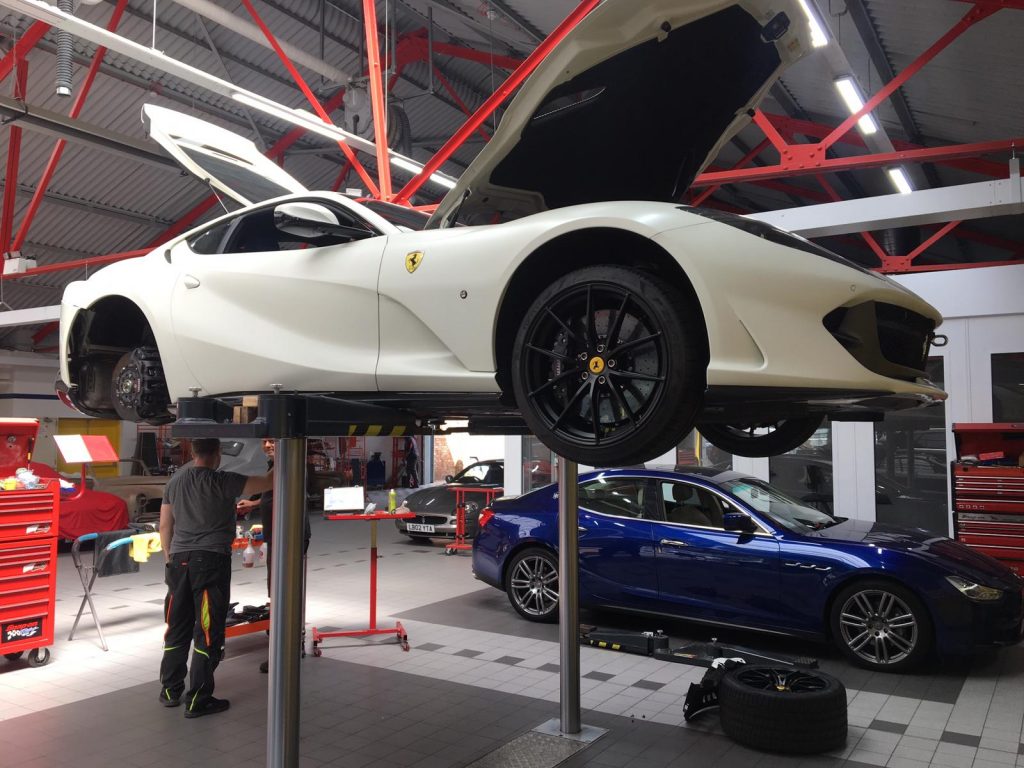 The Ferrari 812 Superfast is something of a paradox, it’s the car no one thought would happen…but everyone expected.

When it debuted the Ferrari F12 Berlinetta was hailed as the final front-engined ICE V12 to roll out of the gates of Maranello and no one could have been called a fool for expecting Ferrari to incorporate forced induction or a hybrid system in order to appease ever stricter emissions regulations.

Yet we were lucky enough to see Ferrari combine everything they had learned during the development of the F12 TDF with everything that made the F12 Berlinetta as genre defining as it was, this left us with the absolutely monstrous 812 Superfast. An 800hp, RWD, naturally aspirated, comfortably 200mph+, front engined V12 Grand Tourer with a prancing horse adorning its bonnet.

This car is truly special and, much like the 458 Speciale, will be remembered as one of the all time greats – we have little to no doubt that the 812 VS (that’s the lightweight version to those of us who don’t frequent the forums) will be Ferrari’s love letter to driving, and we cannot wait to see it.

So you own one of the greatest cars in the world, it ticks every box you could have ever hoped for…but somehow you still find yourself asking “is this really what 800hp sounds like?”. The honest answer to that question is…no it isn’t.

The system as it sits on the car from the factory comes with a set of highly restrictive catalytic converters, these then feed into a central muffler that restricts the flow of exhaust gases yet again before the rear mufflers deaden the sound as the gases leave the car.

The stock exhaust is an exercise in restraint…and when you went out and bought a car with the name “Superfast” it’s probably safe to assume you didn’t buy it for the gas mileage. The 812 needs to be fun, so let’s lay out what the exhaust should have comprised of, and what we installed on a lucky customer’s car earlier this month. 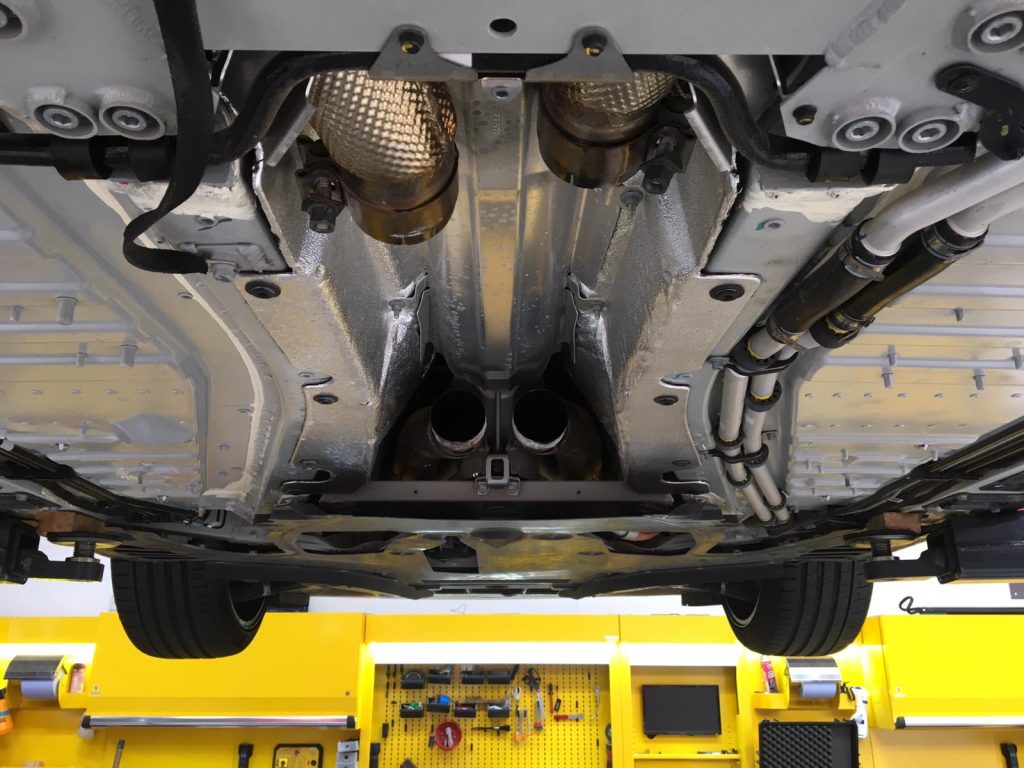 You may remember we installed a similar system on a client’s car a few months ago – that was a level 2 system, the system on the car we’re talking about was a level 3…

Catalytic converters? No thanks. 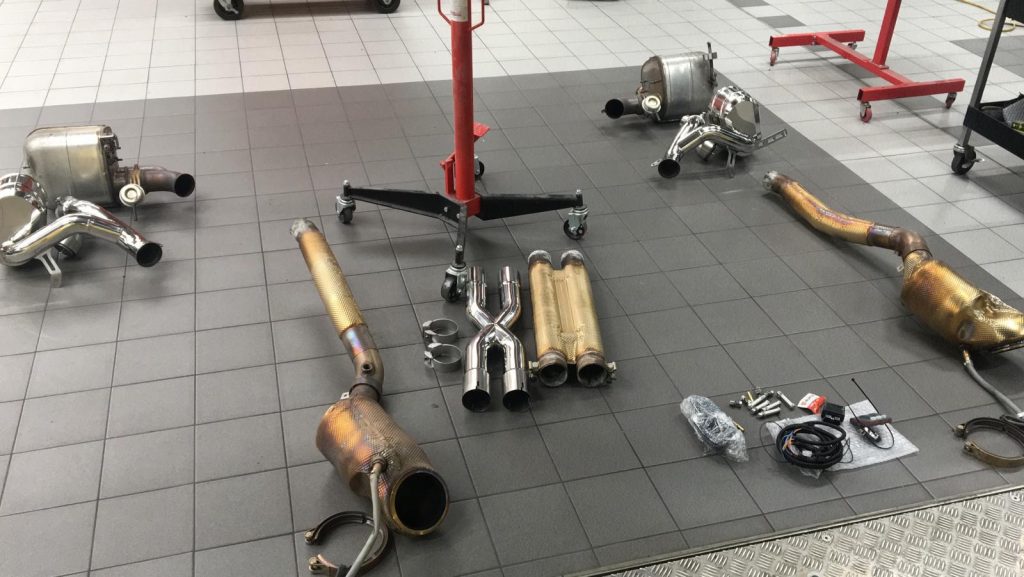 We took the Cats straight out and replaced them with a set of Cat Replacement Pipes. Those massive gold things on the floor to the left and right are the cats…they’re absolutely massive. Have a look at how much more sleek the cat replacement pipes are 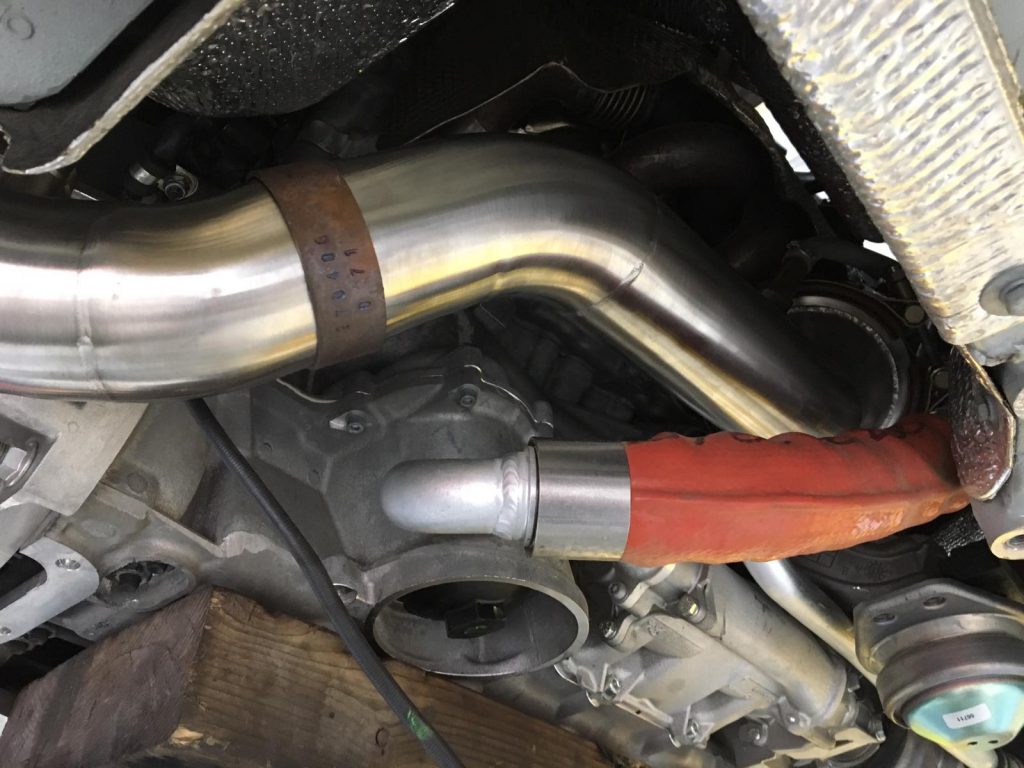 It is worth mentioning that removing the Cats will throw up an Engine Warning Light on the dash because the car will assume that the Cats are no longer working efficiently, luckily the solution is as easy as supplying Capristo’s OBD Wizard which cancels the Warning Light that pertains to the missing Cat (and only that error code, the light will continue to behave exactly as normal otherwise). 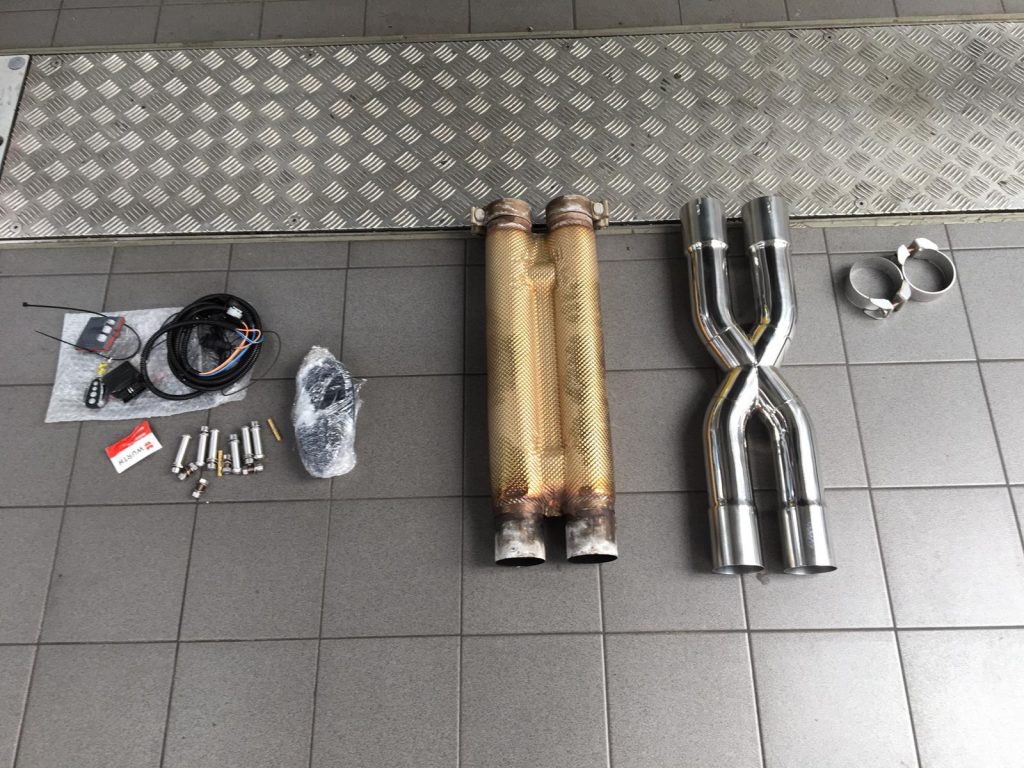 We subbed out the central muffler for Capristo’s stunning X-pipe, not only does this allow the engine to breathe far more freely, it also blends the exhaust gases from either bank together before they hit the rear silencers. Thanks to acoustic phasing this lifts the pitch of the exhaust note significantly which in turn manifests itself as a proper motorsport V12 howl coming out of the back of your Superfast! 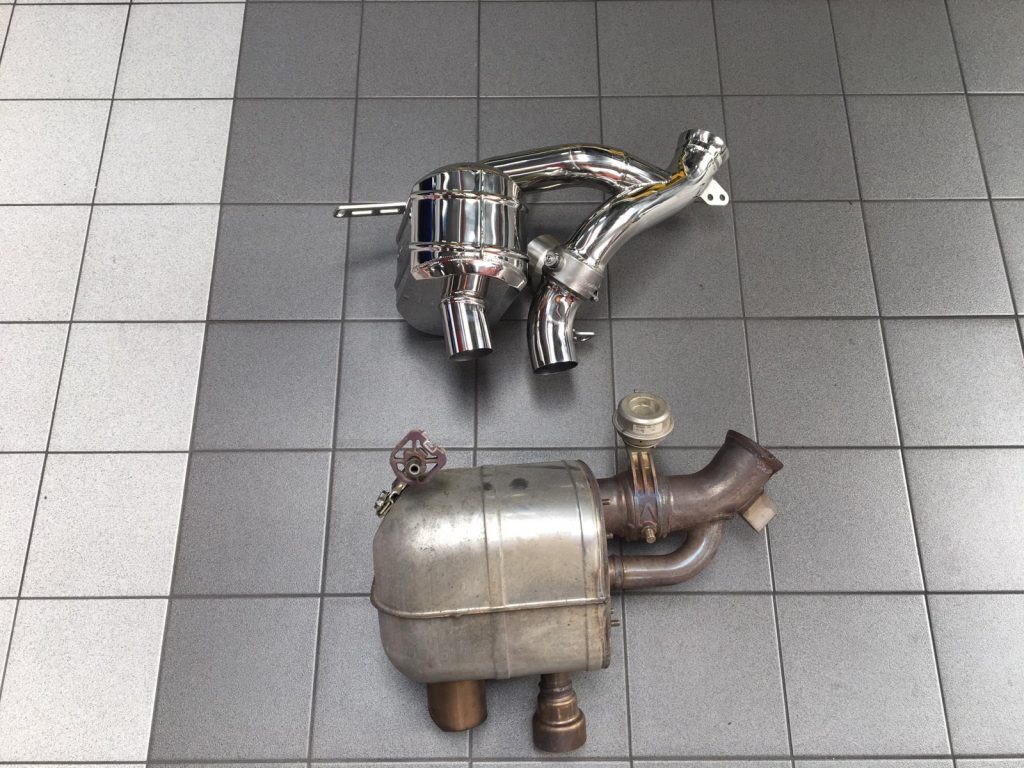 Capristo’s offering for the 812 is one of their finest to date, and is crafted from the finest T309 aerospace grade stainless steel. The term “Aerospace grade” gets thrown around a lot when talking about metals…most of the time it’s conveniently left out that the particular grade someone is trying sell you is used exclusively for the bathroom door locks on the plane, T309 however is regularly used to make interior elements for jet engines, heat exchangers and kilns…all that to say it’s actually overkill for an exhaust system, which makes it perfect for a V12 Ferrari.

As standard the valves on a Ferrari are controlled by an algorithm that takes RPM, speed and throttle input and works out, based on the interplay of those 3 metrics, whether the valves need to open or not. With the Capristo remote control kit the “load request” algorithm can be overridden by the push of a button. You want the valves open on start up? Hit the button. You want them closed while you’re on the motorway? Hit the button.

Having control is never a bad thing, and that’s exactly what this remote-control system offers you.

So laid out the system was comprised of the following:

You can check out our walk around video below where we run through exactly what was put on the car, show you the valves in action and we hear it rev!